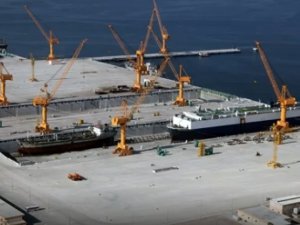 There is a stronger than expected surge in interest for work on ballast water management systems, Mawali said.

“The requirements of any ship during the dry-docking will increase; the yards will have its part to play due to these new rules,” Mawali said in an interview.

There is a stronger than expected surge in interest for work on ballast water management systems, Mawali said.

Ships take on ballast water at port or at sea to maintain stability and minimize stress on the hull. However, when they dispose the water at another port, it introduces bacteria and non-native aquatic organisms in the local marine environment.

The International Maritime Organization’s Ballast Water Management Convention came into force on September 8, 2017 with the aim of mitigating this transfer.

The IMO will cap sulfur in marine fuels at 0.5% worldwide from January 1, 2020, from 3.5% currently. This applies outside designated emission control areas where the limit is already 0.1%.

Uptake of scrubbers is likely to see a significant jump in the future to comply with the rule, with some industry sources expecting to see at least 60% of the current ships opt for scrubbers by 2022.

“The yard will have better chance to work on both scopes [ballast water management systems and scrubber retrofits] and to get the increment to carry the work with makers and manufacturers,” Mawali said.

Since ODC began operations back in 2011, it has carried out some 570 repair/conversion projects, Mawali said.

“Our aim is to be the first choice for shipowners for ship repair and conversion operations of commercial tonnage and naval vessels, as well as the offshore industry, not only in Oman, but the entire Middle East,” Mawali said.

The company is also planning to venture into shipbuilding, Mawali said.

“We have a plan and the demand is there,” he said

“We will expand and vary our scope of work and business stream, from general repair to small business unit of new building, beside retrofitting of BWMS and scrubber,” Mawali added.

The company’s shipyard has the capability and capacity to deliver small units such as OSVs, tugs and barges to the worldwide ship building market, he said. ODC’s facility is strategically located in Duqm, on Oman’s coastline along the Indian Ocean.

In total, ODC’s yard covers an area more than 2.4 million square meters. The shipyard has two ULCC size graving docks, five quays, with a total of 2,800 meters of alongside berthage with water depths of between 9 and 10 meters, and 14 jib cranes.

“Oman’s ports one day will become the maritime and shipping hubs for shipowners and will play a vital role in providing maritime advice on the region,” Mawali said.

This news is a total 523 time has been read
Tags: Oman Drydock Company Sees Jump in Retrofit Work as Shipping Braces for New Rules