On The Danger Of Becoming A Marine Pilot 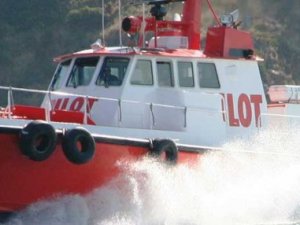 Sadly, today I read in gCaptain about another ship pilot killed in the line of duty. This time the accident happened while a pilot was boarding MV Sunmi, a tiny Bahama registered freighter, in the Thames River. These piloting accidents happen far too ofte

Often it is the ship’s fault for putting out faulty pilot ladders that are in direct violation of IMO regulations. In my new book Crossing The Bar, published by Skyhorse, about my 31 year career of piloting ships into San Francisco Bay, I write about many pilot accidents.

Here is an exerpt from the book:

Here are their stories: On October 24, 2006 Boston Harbor Pilot Captain Robert G. Cordes, a thirty year veteran, was killed after falling more than twenty feet from a twenty-eight foot ladder while attempting to board the 803 foot Baldock moored at a Chelsea, Massachusetts salt terminal showing that pilots can get injured or killed even at the dock.

The ship could have moved further down the dock to allow the gangway to be lowered onto a barge that Cordes boarded from. Instead he had to climb up a Jacobs ladder which is far more strenuous than a gangway.

Another tragedy happened at 2130 hours on January 9, 2006 when fifty year old Columbia River Bar Pilot Captain Kevin Murray was lost at sea during a forty knot gale with 18-20 foot seas while disembarking from the loaded log carrier Dry Beam. Murray fell while attempting to get off when the ship took a deep roll toward the Pilot Boat Chinook. No one knows why he fell into the 47 degree Pacific Ocean, but the Chinook couldn’t immediately locate him and he disappeared. A Coast Guard Jayhawk helicopter started searching in the wrong location because they thought Murray had fallen off a different ship. Four ships crossed the Bar that night, despite the conditions, but it was too rough for the Coast Guard’s 47 foot rescue boats to get out to sea until the next morning. Captain Murray was a new pilot with only one year of service on the Bar. His body wasn’t recovered for three days. He was found seventy-five miles north the accident site!

Cape Disappointment, on the north side of the Columbia River, was named by Englishman Captain John Mears in 1788 when his ship failed to find the river. In 1805 Lewis and Clark were also disappointed, hoping a ship might be anchored at the mouth of the river when they arrived on the West Coast. Cape Disappointment lighthouse is the oldest lighthouse on the West Coast standing guard over “The graveyard of the Pacific,” named for the severe weather that regularly pummels the Oregon coast. Disappointment could also be applied to the brave pilots who work the Bar because in 163?years some two dozen of them have perished in the line of duty.

The Columbia River Pilots are the only pilots in the U.S. using helicopters to board ships 24/7, even in harsh weather. Wind and low visibility can restrict the use of helicopters, whereas a traditional pilot boat can board a pilot in any visibility and in almost any weather. Helicopters don’t necessarily make transferring safe because several helicopters worldwide have crashed hauling pilots out to ships. The night of his death, Captain Murray didn’t use their helo and maybe he should have.

On January 20, 2007, the 57 foot pilot boat Galtex sank in heavy seas in the Gulf of Mexico while transferring Galveston-Texas City Pilot William R. Kern III. Allegedly she was hit and rolled over by the much larger, offshore oil-support vessel Sanco Sea. Kern and boat captain George Robert Frazier (55) were trapped inside the overturned pilot boat for twenty-five minutes until Kern was rescued by another pilot boat. Captain Frazier, a seventeen year veteran skipper, died in this needless tragedy. Kern was lucky he didn’t drown because he wasn’t wearing a floatation device.

Ships can easily smash into pilot boats, and being so much larger can roll them over which is all too common. Captains with any nautical savvy are always out on the bridge wing watching the pilot safely get off, not just taking the word of his deck officer, before ordering more speed or turning their ships. Too many times I swung off a pilot ladder and looked up to wave good bye only to see the bridge wing empty. When a ship is about to cross the Pacific, a few minutes don’t amount to much wasted time.

On January 29, 2007 another horrific accident occurred when my friend, thirty-year Hawaii Port Pilot veteran, Dave Lyman, fell into the ocean after disembarking from the passenger liner the Island Princess while departing Nawiliwili, Kauai. Dave was lacerated by his own pilot boat’s propellers. The pilot boat captain, who was alone, was unable to rescue Dave in time to stop him from bleeding to death. This is the reason we have deck hands.

Dave and I sailed together as Third Mates on one of my first ships, an old tramp steamer with the peculiar name, S.S. Surfer. One of our regular ports was Honolulu where Dave told me, he was going to be a Hawaii Port Pilot one day. I thought he was dreaming because that didn’t seem attainable, especially when I was twenty-two.

He was a hell of a character with a huge handlebar mustache and always sported a straw Panama hat like he was a plantation owner. He was also an ordained ”Sky Pilot” performing marriages all over Hawaii until his early demise. He was a fun-loving partier and he would have loved the farewell party thousands of his friends threw to wish him a fond aloha at his sea burial in Honolulu Harbor. He, like many other working pilots, died too soon.

Another calamity happened on February 4, 2007 when Chesapeake & Interstate Pilot Lynn Deibert fell into the Atlantic off Cape Henlopen, Delaware and was never found

Captain Paul Lobo is author of the book Crossing The Bar which he wrote after spending more than thirty-one years as a federally and state licensed First Class sea pilot and docking master, bringing 6452 vessels of every description from the treacherous waters of the Pacific Ocean, west of the Golden Gate Bridge, into San Francisco Bay.

This news is a total 22637 time has been read
Tags: On The Danger Of Becoming A Marine Pilot