On the verge of first launch 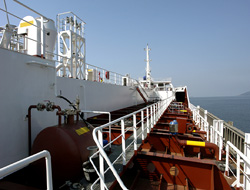 The Turkish shipbuilder Çiçek Shipyard is soon to launch the first of four 3,150 dwt chemical tankers that were originally under construction to the yard?s own account.

The Turkish shipbuilder Çiçek Shipyard is soon to launch the first of four 3,150 dwt chemical tankers that were originally under construction to the yard"s own account. Subsequently sold to Maltese investors, the first is due for delivery in November 2008 while the remaining three ships will be delivered at four-monthly intervals in 2009.

To be classed by Bureau Veritas and constructed to meet Ice B standards, they will be capable of worldwide trading, transporting oil products, chemicals (IMO type II) and vegetable, animal and fish oils. MarineLine coatings have been selected by Çiçek to give the ability to carry a wide range of cargoes while high manoeuvrability is guaranteed by the choice of twin azimuthing propellers and a bow thruster.

According to Berke Cicek, Vice President of Cicek Shipyard, the new owners are confident of securing profitable employment or re-sale contracts for these vessels. He explained:

'New double-hulled vessels such as these are in great demand to replace older tonnage and because we took the initiative to start construction to our own account, the new owners have benefited from an extremely short delivery period.They are now talking to a number of potential charterers and are confident of finding immediate and profitable employment for these vessels.'

'Our contract with this owner also allows for late changes in specification, for example in the choice of tank coatings, thus providing great flexibility when discussing potential charterers" precise requirements. We are, with due notice, able to make more radical changes, as might be requested were the current owners to decide to sell individual vessels rather than trade them.'

Çiçek Shipyard is located on Tuzla Bay and its current orderbook includes 58,000 dwt bulk carriers, 1300 TEU containerships and 18,000/26,000 dwt chemical tankers. The largest vessels are constructed in a 37m wide building dock while ships of up to 25,000dwt can be built on an adjacent slipway. The 3,150 dwt tankers are being constructed on a second slipway, capable of building ships of up to 3,500 dwt.