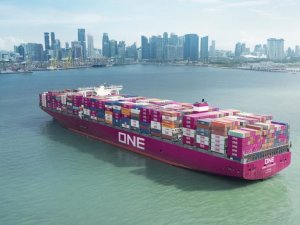 ONE said the “Bunker cost Recovery Surcharge (BRS)” charge, ranging from $37 to $60 per dry TEU and up to $110 per reefer, will be applied on a “widespread basis” excluding exports from mainland China.

The BRS will be implemented on various dates beginning in July.

“ONE has encountered progressive and significant inflation of fuel costs over recent months,” ONE said in a statement announcing the BRS charge. “Bunker fuel prices have increased by more than 25% during 2018 and could escalate still further. This sustained surge in fuel costs has greatly impacted our cost base. The escalating cost situation has now reached the point at which ONE are forced to respond by adjusting our approach to bunker related pricing components.”

ONE started operations as the world’s sixth largest container shipping group on April 1, 2018, following the integration of the container businesses of major Japanese carriers NYK Line, “K” Line, and MOL.

ONE joins MSC, CMA CGM, Maersk Line and Hapag-Lloyd who have all rolled out similar emergency bunker surcharges in recent weeks.

Shipping consultant Drewry this week slammed the emergency bunker charges as a “desperate move” by box lines resulting from their “failure to control costs,” which has left them exposed to spikes fuel price. “Shippers are right to be angry about emergency fuel surcharges levied by carriers,” said Drewry.

This news is a total 988 time has been read
Tags: ONE Joins Rivals in Introducing Emergency Bunker Fuel Surcharge