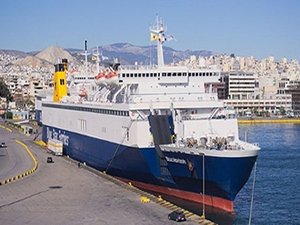 An engine room accident aboard a Greek inter-island ferry reportedly killed one crew member and injured three others. The accident happened in the port of Heraklion on the island of Crete on August 24.

According to statements from the ferry operator, Blue Star Ferries, as well as the Hellenic Coast Guard, the vessel the Blue Horizon had arrived in Crete around 6 a.m. after its regular voyage from Athens’ port of Piraeus on the Greek mainland. There were no passengers onboard when at around 9:30 a.m. local time there was either a steam leak or possibly an explosion in the engine room. Some reports suggest that a pump exploded in the engine room.

According to the statements, the crew members were performing regular maintenance at the time. Four crew members were reported scalded by the steam with varying degrees of burns on their bodies. All four were removed by ambulance to a local hospital. Media reports are saying that one crew member died at the hospital of his injuries. Another of the crew members also was reported requiring extensive medial attention while two only required first aid treatments.

Greece’s minister of shipping expressed his condolences over the accident and promised a full investigation in to the cause. Port officials in Heraklion reportedly had already commenced an investigation.

According to AIS data, the Blue Horizon was back in operation today sailing between Piraeus and Heraklion.

This news is a total 2534 time has been read
Tags: One Killed, Three Crew Hospitalized in Steam Accident on Greek Ferry