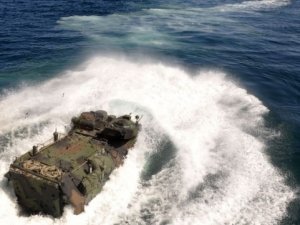 On Thursday, one Marine died and eight went missing in an accident involving an amphibious assault vehicle off the coast of Southern California.

Two others were transported to local hospitals, including one individual in critical condition.

On Thursday, the 15th Marine Expeditionary Unit was conducting an exercise with the Makin Island Amphibious Ready Group off San Clemente Island. At about 1745 hours, the Marines aboard the AAV reported that it was taking on water.

16 servicemembers were inside the AAV at the time of the accident, and seven survivors were rescued in total. Search and rescue efforts for the eight missing individuals continued Friday.

The name of the deceased Marine will be withheld until after the next of kin have been notified. The cause of the incident is under investigation.

The Amphibious Assault Vehicle (AAV) has been in service with the Marine Corps since 1972, and it has undergone a long series of upgrades and life-extension overhauls over the years. It will be gradually replaced by BAE's wheeled Amphibious Combat Vehicle (ACV) design.

This news is a total 683 time has been read
Tags: One Marine Dead, Eight Missing in Amphibious Vehicle Accident

Seafarer Killed in Cargo Accident Near TrondheimOn Monday, a seafarer was killed in an accident at the Trondheim Port Authority's facility in Orkanger, Norway during cargo operations.