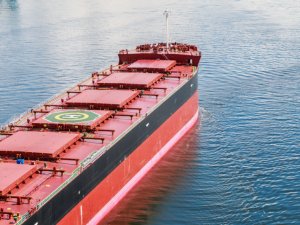 A helicopter used to transfer marine pilots to and from ships at Australia’s largest iron ore loading port has crashed in the waters off Western Australia, leaving one person missing.

The Australian Maritime Safety Authority (AMSA) is coordinating a search and rescue operation about 35 km north of Port Hedland in Western Australia this morning.

The helicopter had two pilots onboard when it was forced to ditch approximately 30 km north-west of Port Hedland as it headed to the bulk carrier MV Squireship to pick up a marine pilot, according to a statement from the AMSA.

The marine pilot on board the MV Squireship witnessed the helicopter ditch into the water and immediately notified harbor control, which in turn advised AMSA just before midnight local time.

One person was rescued from the water about an hour after the incident and taken to South Hedland Hospital for medical treatment, according to the Pilbara Ports Authority. The Port Authority said the helicopter ditched at 2350hrs (AWST) Thursday morning at the seaward end of the Port Hedland shipping channel.

The helicopter, a twin-engine Eurocopter EC135, is operated by Mackay Helicopters, a subsidiary of Aviator Group. The company said in a statement that one pilot was rescued from a liferaft after entering the water. An extensive search is underway for the second pilot.

“Our immediate focus is on assisting with the ongoing search effort and supporting our staff and their families affected by this accident,” said Ian Vanderbeek, CEO of Aviator Group.

There were minor interruptions to shipping overnight, according to the Port Authority, but shipping resumed at 0830hrs Thursday morning.

Agencies involved in the search include the AMSA, the Rescue Coordination Centre Australia, Pilbara Ports Authority and Aviator Group, as well as there assets.

Two weeks ago, a ship pilot at the Port of Lisbon in Portugal was killed after falling into the water while disembarking from a containership in rough seas.

This news is a total 644 time has been read
Tags: One Missing After Marine Pilot Transfer Helicopter Ditches Off Port Hedland, Western Australia