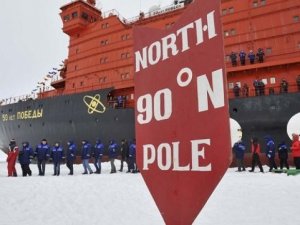 Another of Russia’s new-line nuclear icebreakers is running afoul of construction deadlines in a delay that will likely force older ones to operate longer, a report in the business daily Kommersant said.

The hull of the Arktika, one of Russia’s three LK-60 nuclear icebreakers, was floated in 2016 at the Baltic Shipyard in St. Petersburg. It was due to be commissioned in May of 2019, but that deadline has been pushed back to April of 2020 thanks to a delay in manufacturing its steam turbine.

The holdup may seem a relative blip for the $525 million project, but it poses the first significant clash with the timeline Russia has laid out for opening the Arctic’s Northern Sea Route to year round traffic – one of Moscow’s central economic goals.

In order to keep up with this aspiration – which has been mandated by no less than Vladimir Putin himself – it is thought that Russia will have to extend the engineered lifespans of all four nuclear powered icebreakers it currently has in service, the paper reported.

Three of these, the Taymyr, the Vaygach and the Yamal, put to service in the late 1980s, and in late July, officials at Rosatom, Russia’s state nuclear corporation, launched a series of studies to boost their service lifetimes to 36 years and beyond.

The newer 50 Let Pobedy, which is currently the largest, set sail in 2007, which itself represents a 10-year delay in the vessel’s launch date.

Still, Moscow’s hopes for an open Arctic rely somewhat luridly on a combination of climate change and the LK-60 nuclear icebreaker line.

These ships, billed as even larger than the 50 Let Pobedy, are billed as universal use icebreakers, and are built to forge through ice as thick as three meters, while still being capable of navigating the Arctic’s river tributaries.

The hull for the Sibir, the second LK-60 icebreaker, was floated in September. The hull of the third and last, called the Ural, still hasn’t been launched.

This news is a total 545 time has been read
Tags: One of Russia’s New Nuclear Icebreakers Facing Delays