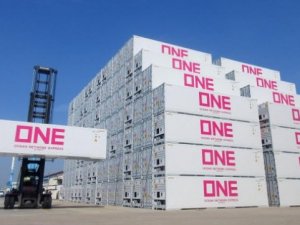 Of these, 2,100 will be equipped with controlled atmosphere technology to extend the effective shelf life of fruit and vegetables by significantly slowing down produce respiration and ripening rates. The new refrigerated containers are being delivered and integrated into the existing ONE fleet starting from end July on wards; just in time to capture peak season reefer demand from the Southern Hemisphere markets.

Based in Singapore, the ONE alliance has one of the largest and youngest reefer fleets in the world. The ONE alliance commenced operation on April 1, and the total investment made by Kawasaki Kisen Kaisha (K Line), Mitsui O.S.K. Lines (MOL) and Nippon Yusen Kabushiki Kaisha (NYK) was $3 billion with K Line contributing 31 percent, MOL contributing 31 percent and NYK contributing 38 percent. The integration of three Japanese companies allowed ONE to become one of the top three reefer carriers in the world and also strengthened the market presence in major reefer markets such as North and South Americas, South Africa, Europe, the Mediterranean, Intra-Asia and Oceania.

The alliance operates around 230 vessels with a total capacity of 1.44 million TEUs. The vessels operate on 85 services, calling at over 200 ports in 100 countries. In July, ONE celebrated the maiden voyage of the second of a new series of seven 14,000 TEU-class magenta container ships, One Minato.

The reefer order is larger than that of Hapag-Lloyd last week. Hapag Lloyd ordered 11,100 reefers to be integrated to the company’s existing fleet of 91,000, with delivery between August and December this year. Hapag-Lloyd already has a significant footprint in the refrigerated container market, and since 2015 the liner shipping company has purchased a total of 30,550 new reefers (including the latest order). 2,000 of the new containers will be equipped with controlled atmosphere technology.