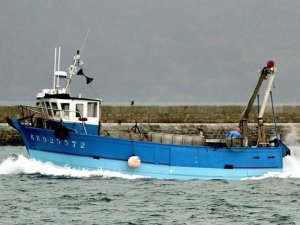 One seaman died after the French fishing boat St Bernard sank on 2 nautical miles off port of Portsall in Ploudalmezeau, France.

The vessel was approaching the port in rough weather and heavy seas, but capsized and sank near the coast. The accident was witnessed by fishing ship Christelle-Mikael, which immediately sent mayday signal to the local authorities. On board of the sank fishing boat St Bernard there was one seamen, who went missing. At the scene were sent all the available vessels, as well as Cessna aircraft of the French Customs and a Falcon 50 of the French Navy, which started SAR operation for the missing skipper. Less than an hour late, the body of a sailor was recovered, but unfortunately he was already dead.

The local authorities initiated investigation for the root cause of the accident, but probably the fishing boat St Bernard was caught by heavy storm and was unable to survive in such bad weather. During the accident the winds in the area were strong and the waves were 3-4 m height.

“The body of the fisherman was recovered at 1455 by the semi-rigid craft of the SNS 093 of the station of Portsall. The two volunteers who were on board intervened in a very rugged zone”, says Alain Quivoron, owner of the SNS 093 boat.

The victim of the accident is the owner and skipper of the boat, which was in transit to Portsall and then Saint-Pabu, where it was based.

This news is a total 920 time has been read
Tags: One seaman died after French fishing boat St Bernard sank off Portsall