One step closer to renewal 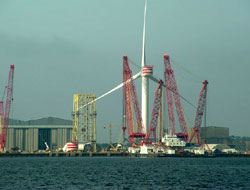 A compulsory purchase order is in prospect for the disused site of one of Europe?s largest offshore fabrication yards.

A compulsory purchase order is in prospect for the disused site of one of Europe"s largest offshore fabrication yards.

A compulsory purchase order is in prospect for the disused site of one of Europe"s largest offshore fabrication yards unless a deal over its future can be reached within months, a Scottish local authority has confirmed.

Highland Council director of planning and development Stuart Black confirmed today that the authority will act within months finally to resolve a long-running dispute between two landowners and bring about a return to economic activity at Nigg in Ross-shire as soon as possible, perhaps on a multiuser basis.

Meanwhile, Birmingham-based DSM Demolition ? one of Britain"s leading demolition contractors ? has announced that it is interested in a deal which would see it become involved in decommissioning offshore structures as well as potentially fabricating equipment for the offshore renewal sector.

DSM spokesman Graham Crowe said that while the company is best known for demolishing large buildings such as the BBC"s Pebble Mill studios in the Midlands and Liverpool"s old bus station, it is not a ?shipbreaking virgin? and has previously scrapped vessels in Britain.

Able UK, which has in the past put forward similar ideas, appears to have had no contact with the council for some time. However, Lloyd"s List understands it may now re-evaluate its options.

At the heart of the wrangle is the old Kellogg Brown & Root yard at Nigg, which has been on the market for over four years. But a bust-up between two landowners has so far scuppered any deal, much to the frustration of Highland Council. Highland Council is seeking to reactive the facility as part of its drive to bring badly-needed new jobs into the area.

The Nigg yard was opened in 1972 to build platforms for the North Sea oil and gas industry. Among the mothballed facilities are a huge dry dock, 45,570 sq m of covered workshop and almost 70 acres of yard space.

At its peak, Nigg employed around 5,000 people, making it one of the most important regional employers. But with the overall decline of the North Sea sector work dried up, and although some activity currently takes place on the basis of sub-leases, the yard has largely been idle for the best part of a decade.

KBR first put Nigg on the market in February 2005, since which time a number of firms have expressed an interesting in taking over the facility.

But so far a sale has proved impossible, thanks to a disagreement over the lease on part of the land on which the yard stands, which is held by the Wakelyn Trust, a trust fund for the benefit of local absentee landlords the Nightingale family.

Under its terms, the Wakelyn Trust has the right to insist that the land is restored to its original condition. That would entail the removal of key sheds and, crucially, a graving dock originally funded from public money. Alternatively, the lease specifies that ?the tenant shall pay to the landlords on demand an amount equal to the costs of such works?. The upshot has been continuing paralysis which has prevented redevelopment.

But the local authority is determined to press on with its regeneration scheme, and its so-called Nigg Masterplan is widely expected to be ratified by the Scottish Executive later this year. After that, it could force the sale of the site and proceed with the scheme.

Mr Black told that the master-plan was based on two main options, namely the continuation of oil-related activity including decommissioning and a move towards renewable energy fabrication, with a focus on offshore windfarms. However, the choice might not have to be either/or, given the size of the site.

?One of the problems in the past was the boom-and-bust cycle. What we are keen to do is establish a more stable base of employment,? he added.

Mr Crowe said that thanks to DSM"s background in specialist demolition it was working closely with the council towards creating a mixed facility in line with the masterplan.

?We are putting together some bids,? he said. ?We"re not shipbreaking virgins. We have done it on a small scale, but we tend to operate quietly.?

This news is a total 1986 time has been read