ONE Takes $120M Loss Due to "Teething Problems" 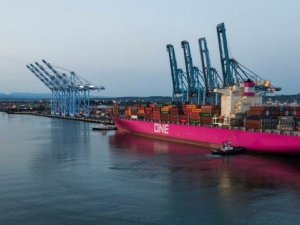 Ocean Network Express (ONE), the ocean carrier comprising the container operations of NYK, MOL and K Line, posted a loss of $120 million in the first quarter due to "operational teething problems that affected service quality" and higher bunker prices.

Ocean Network Express (ONE), the ocean carrier comprising the container operations of NYK, MOL and K Line, posted a loss of $120 million in the first quarter due to "operational teething problems that affected service quality" and higher bunker prices. The first-quarter result puts it on track to post a $38 million loss for the first half, down from a break-even forecast.

Utilization of ONE's combined fleet was 73 percent, due in part to what K Line described as "clumsy services in the initial stage" of its launch. Shippers and forwarders complained of booking difficulties as the three ocean carriers attempted to merge their business operations and shift to one common booking system, and the disruption resulted in lower than expected handling volumes.

ONE expects that now that most of its integration difficulties have been resolved, it will return to profitability in the second quarter and post a full-year profit of about $110 million - so long as bunker prices do not rise. It predicts that iprovements in the supply and demand balance in the Asia-North America trades will help, and it forecasts a full recovery to expected levels of utilization by the second quarter.

Ultimately, ONE hopes to achieve cost savings from integration on the order of $1 billion per year, driving profitability higher. This will come in the form of cutting down on variable costs on shoreside operations, including rail, truck, feeder, terminal and equipment expenses; overhead cuts for IT and staffing; and vessel cost operating reductions from rationalization. ONE says that it is achieving these savings faster than expected, and it expects to see about 80 percent of the total ($800 million) this year.

In 2016, NYK, MOL and K Line agreed to join their containerized businesses in order to gain scale and reduce costs, and they have invested $3 billion in the joint venture. NYK holds the largest share, at 38 percent, and MOL and K-Line hold 31 percent each. “A large company buys a small company and grows bigger, such deals have been repeated in the past, but this is the first time [in shipping] that three companies jointly start a new business on an equal footing,” said MOL CEO Junichirio Ikeda, speaking to the Wall Street Journal in May.

ONE began accepting bookings on February 1, in parallel with each individual lines' booking systems, and it commenced its combined operations on April 1. With 230 container ships and about 1.5 million TEU of capacity, it became the sixth-largest ocean carrier overnight. The first vessel branded with its logo and distinctive magenta-and-white livery arrived on the U.S. West Coast in June.

This news is a total 369 time has been read
Tags: ONE Takes $120M Loss Due to "Teething Problems"