One Voice to set the study 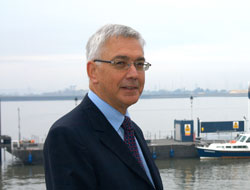 Britain's maritime industry will publish an in-depth analysis early next year setting out the strategic importance of shipping, ports and related professional services to the UK economy.

Britain's maritime industry will publish an in-depth analysis early next year setting out the strategic importance of shipping, ports and related professional services to the UK economy as part of a concerted effort to build greater support among decision-makers and opinion-formers.

The initiative is at the centre of a new push by the organisations that represent all factions of the country"s diverse maritime community to present a united front in dealings with government ministers, legislators, and civil servants.

One Voice, the grouping established in the summer that brings together six leading industry associations, has now drawn up a lengthy agenda as it starts to make itself heard.

Top of the list is research by Oxford Economics that has been commissioned by One Voice to produce what will be the first ever comprehensive study covering virtually the entire maritime sector.

That will provide the hard facts and figures with which the industry will be able to back up its case in dealings with policy-makers, One Voice chairman Richard Everitt said today.

The coalition plans to launch the report at a parliamentary reception and hopes it will form the basis of a better understanding of maritime issues and concerns at the highest level.

The idea behind the Oxford Economics study is to ?bring all the strands together,? by measuring the importance of the whole maritime sector to both the UK and London"s position as a global financial and professional services centre, said Mr Everitt who is also chief executive of the Port of London Authority and chairman of the UK Major Ports Group.

Excluded from the study will be the contribution to the local economy of the International Maritime Organization, the only UN agency based in the UK which also adds to the level of maritime expertise in the capital. and is the reason why a number of other international shipping organisations are headquartered in London.

One Voice, founded by the Baltic Exchange, British Ports Association, Chamber of Shipping, Institute of Chartered Shipbrokers, Maritime London, and UK Major Ports Group, now has a small dedicated secretariat. The recent move of the British Ports Association and UKMPG to the same building as the Chamber of Shipping is helping to foster closer relations between the trade organisations, said Mr Everitt. Also sharing premises are the Merchant Navy Training Board. and Ports Skills and Safety.

The formation of One Voice is welcomed by the government

The government has welcomed the formation of One Voice, with shipping minister JimFitzpatrick saying recently that it had helped to simplify the relationship between the two sides.

The main message to government is the need for an ?investment friendly? environment.? That requires certainty, with Mr Everitt urging the government not to keep ?tinkering at the edges? in a way that undermines business confidence and drives away ships from the Red Ensign or non-domiciled shipowners from the UK.

Safeguarding is one of the top priorities

Safeguarding a competitive commercial, fiscal and employment climate is one of the top priorities for One Voice.

But other key issues include landside infrastructure and planning; the environment; the Marine Bill; skills; the rates revaluation of UK ports; maritime security; and coastal shipping.

The latter is of particular concern after a recent report which concluded that new international rules on sulphur emissions that come into force in 2015 could shift between 30% and 50% of coastal cargo traffic back on to the roads because of the added cost of marine fuel.

One Voice feels that the British government has something of a ?blind spot? with regards to coastal shipping that has not grown in tandem with the UK flag fleet.

The threat to shortsea services from new emission rules is a further setback, but One Voice now plans to work with other European bodies to find a solution and ensure coastal shipping in northern Europe is not priced out of business.

This news is a total 5693 time has been read