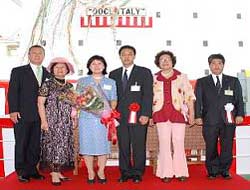 Last of the S-Class series from Imabari Shipbuilding. OOCL announced today June 29, 2007 (Friday) the christening of its eighth 5,888-TEU vessel.

The newbuilding was named the m.v. OOCL Italy by sponsor Dr. Rulin Fuong Tung, the wife of Mr. Andy Tung, Director of Corporate Planning and Marketing of OOCL.

The m.v. OOCL Italy will be deployed in Asia-East Coast Express (AEX) Loop with the Grand Alliance. The port rotation is:

Linking Asia, Europe, North America, the Mediterranean, the Indian sub-continent, the Middle East and Australia/New Zealand, the company offers transportation services to all major east/west trading economies of the world.

OOCL is one of the leading international carriers serving China, providing a full range of logistics and transportation services throughout the country. It is also an industry leader in the use of information technology and e-commerce to manage the entire cargo process.