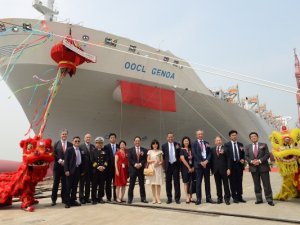 The OOCL Genoa was named by her sponsor Mrs. Tamiko Onaka at Hudong-Zhonghua Shipbuilding (Group) Co. The ship is scheduled to join the company’s fleet this year and will serve the OOCL South China 2 service.

“In today’s extremely competitive environment, cost and operational efficiency is paramount to our performance and these magnificent vessels, like that of OOCL Genoa which we are about to unveil, play a very important part to our success,” said Alan Tung, Acting Chief Financial Officer of Orient Overseas (International) Limited.

“OOCL Genoa, together with the other seven sister vessels being built here at Hudong, will form part of our core fleet and play an important role in allowing OOCL to maintain its competitive edge in the market.”

“Our company is well placed for the future in its ability to deliver superior performance, upgrade its assets, and provide the best possible service quality at the most cost efficient way possible.  OOCL is committed in its drive to deliver industry-leading operating margins.  In addition, we are deliberate in our efforts to balance the need for a strong and liquid balance sheet, necessary in a capital intensive business, with an industry-competitive shareholder return,” he continued.

Fincantieri Halts Production for 2 Weeks amid Coronavirus OutbreakItalian shipbuilding major Fincantieri has suspended production activities at its Italian shipyards as a precautionary measure aimed at countering the potential spread of the coronavirus, the company informed.