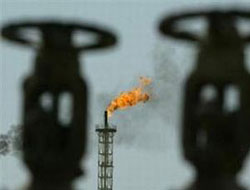 Oil prices rose above $74 a barrel Tuesday in Asia as investors expected OPEC to try to halt a three-month slide in prices by cutting production quotas at least 1 million barrels a day.

Oil prices rose above $74 a barrel Tuesday in Asia as investors expected OPEC to try to halt a three-month slide in prices by cutting production quotas at least 1 million barrels a day.

Light, sweet crude for November delivery rose 55 cents to $74.80 a barrel in electronic trading on the New York Mercantile Exchange by midafternoon in Singapore, after reaching as high as $75.69 earlier in the session.

"It definitely looks like a cut is in the cards," said Victor Shum, an energy analyst at consultancy Purvin & Gertz in Singapore. "A cut of at least 1 million has been priced in. A cut much larger than 1 million could move prices higher."

The Organization of Petroleum Exporting Countries, which accounts for about 40% of global oil supply, plans to announce an output reduction at a meeting on Oct. 24 at its headquarters in Vienna, said the group's president, Chakib Khelil.

Khelil has said OPEC may cut output again at a meeting in December, and that the group considers the oil market oversupplied by about 2 million barrels a day.

Investors are also keeping a close eye on whether non-OPEC producers, such as Russia, will reduce supply as analysts lower price expectations for next year. Deutsche Bank on Monday cut its 2009 oil price forecast to $60 a barrel from $92 and predicted $57.50 for 2010.

"Producers are getting concerned about this downward spiral in pricing since the summer," Shum said. "Some governments have based their budgets higher than current prices."

This news is a total 822 time has been read