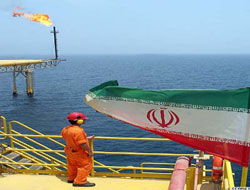 Falling oil prices will hurt investment and ultimately the consumer if they do not return to a "logical level," Iran's oil minister said on Saturday after crude plunged by 17 percent in a week of turmoil.

The aim OPEC pursues is establishing stability in the market

Falling oil prices will hurt investment and ultimately the consumer if they do not return to a "logical level," Iran's oil minister said on Saturday after crude plunged by 17 percent in a week of turmoil.

Oil Minister Gholamhossein Nozari called for "fundamental decisions" but did not spell out whether he believed OPEC should cut output at an emergency meeting scheduled for next month in Vienna, suggesting it would depend on the market situation.

Crude prices were not predictable, he said on the sidelines of an energy conference in Tehran.
Iran is the world's fourth-largest oil producer and traditionally a price hawk in the Organization of the Petroleum Exporting Countries (OPEC).

"We think that this meeting will take good decisions. The aim OPEC pursues is establishing stability in the market," Nozari told reporters.

Oil prices touched 13-month lows on Friday in a global flight from risk amid concerns of a worldwide recession and further signs of slumping energy demand.

The price fall has caused some OPEC members to call for a production reduction, and the cartel will discuss the impact of the global financial crisis on the oil market at a Nov. 18 meeting in the Austrian capital.

British Prime Minister Gordon Brown has said it would be wrong for OPEC to cut output just as oil prices are falling.

Nozari said the cost of implementing upstream oil projects had increased by at least three times in two years and that existing prices would hurt investment and as a result also those buying oil.

"Therefore it seems fundamental decisions should be taken," he said, without elaborating.

"If the oil prices do not return to a logical level it will be the consumers who will incur loss over the long run and providing energy security will be endangered in the future." Asked about future market developments, he said: "The price is not predictable. Even now, under the current conditions, prices can change and attain their upward trend again." Nozari said on Oct. 4 that oil producers were pumping too much oil and that a price under $100 per barrel was too low.

Slumping demand in the United States and other developed economies has sent oil prices off their peak above $147 a barrel in July, after surging consumption in emerging markets such as China sent commodities on a six-year rally.

"Studies indicate that the current critical problem has to do with demand in the market," Nozari said.

"We should be after market stability, meaning that the stability of the market is important both for the producer and the consumer."

This news is a total 763 time has been read