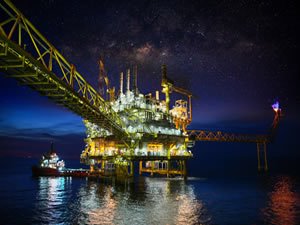 f ever a year needed a shot of glass-half-full attitude, it’s 2020. I got it recently from an oil executive. Conversation turned inevitably to the pandemic and 10 million barrels a day of oil consumption — one in ten — going *poof*.

Against which they offered this: Despite epic disruption, we still used 90 million barrels a day of the stuff. How’s that for describing the worst drop in oil demand ever?

They had reason to be cheerful, though. After spring’s sudden collapse, oil ends the year with renewed vigor. Brent crude is back above $50 a barrel, and energy stocks, which suffered the ignominy of shrinking into the smallest sector of the S&P 500, recently clawed their way back to being only the second smallest (Albeit, temporarily, but see? I can do it too). OPEC estimates demand averaged a hair under 90 million barrels a day this year, down 9.8 million a day from 2019. On the other hand, at an average price of $42 a barrel, that’s still $1.4 trillion of notional revenue just for the upstream bit of the industry.Not bad for a plague year.

This being a lockdown recession, gasoline and jet fuel bore the brunt. Which was the executive’s point: 10% of oil demand is basically flying to see your family and driving to the store more than necessary. But 90% is essential living that stops for nothing — driving you can’t avoid, truck deliveries, plastics and so forth. When Covid-19 is contained, the 10% stuff will come roaring back.

Think of the 10% as a short-term trade. Demand will undoubtedly jump next year. Not completely: OPEC forecasts only about 60% of what was lost in 2020 will come back in 2021. That’s still up 5.9 million barrels a day. With OPEC+ still holding barrels off the market and investment in new supply crushed, the stage is set for higher prices.

Meanwhile, continued monetary easing and (anticipated) fiscal stimulus stoke oil’s old friend, the revived inflation trade. This pushes money into raw materials — the Bloomberg Commodity Spot Index just hit a six-year high — and rotates some out of the froth of tech into the dregs of energy. As for those dregs, abandoned for sins predating Covid-19, oil and gas companies have begun to consolidate and prioritize payouts to shareholders over drilling budgets.

Each of these supports, while defensible, has a crack. The recovery in oil demand is real but also a moving target in a market that usually yo-yos on much smaller swings — or, in the more poetic phrasing of ClearView Energy Partners’ Kevin Book, yaps “at tiny moves like a high-strung miniature poodle on a cocaine binge”. While crude futures have rallied, physical indicators such as refining margins remain low for this time of year. On crude supply, OPEC+ is under growing strain, which is hardly surprising: Four years on from its debut, the oil price is basically the same and members are producing way fewer barrels.

As for the inflation trade, besides the sheer denominator effect following 2020, we all know easy money must — just must — unleash the old bogeyman at some point. But I wonder if that point will be reached in the immediate aftermath of a pandemic, especially for an oil market where spare capacity runs to 8 million barrels a day. Fiscal stimulus is potentially inflationary, but the legislative car crash of the latest relief bill doesn’t exactly stoke confidence on what follows.

The self-help thesis for oil companies is more robust, albeit one that’s on probation. All of which isn’t to say the 10% trade is doomed; rather that it could be a choppier affair than the past month’s surge.

In any case, it’s the 90 part of that 90/10 worldview that really matters; the buy-and-hold investment case rather than a short-term trade. It rests on an essential truth: Oil is deeply embedded in our society and daily behavior. Over the summer, I was surprised at how quickly the roads in my area went from eerily empty to something approaching pre-Covid normality. Sometimes, it just felt good to drive, destination less important than the sheer act of (socially distanced) movement.

It’s a mistake to equate incumbency with permanence, though (ask U.S. coal miners).

One obvious rejoinder to that 90-million-barrel number is that it belies the actual damage Covid-19 inflicted. Back in April, when streets were emptying and hospital wards filling in cities around the world, demand plunged more than 20 million barrels a day. Arresting that owed much to the $10 trillion or so governments threw into the breach.

How 2021’s stimulus dollars get spent (or not) is crucial not just to oil’s near-term trading prospects but the future of those 90 million barrels a day. Oil bulls may well hope for Republican victories in Georgia on January 5 to stymie the greener parts of President-elect Joe Biden’s agenda (although they should beware what Senate deadlock could mean for economic recovery).

More important than that is the context. We’re undergoing the second crisis in roughly a decade that has strengthened government’s role as an economic actor — with implications for how far climate policy will be defined by markets or mandates. The point here isn’t that the Green New Deal won’t be enacted; it’s that it got an airing at all — and pushed the debate in a more interventionist direction. On this front, the victory of relative centrist Biden could actually be helpful to the oil industry. But this trend is not its friend.

Neither is the trend on Wall Street.

Beneath the sheer symbolism of Exxon Mobil Corp.’s fall from the Dow Industrials alongside Tesla Inc.’s catapult into the S&P 500 lurks an existential problem for the oil and gas sector. Despite its incumbency, investors aren’t really buying the 90-million-barrels thesis and have been demanding their money back (or turning activist). Meanwhile Tesla, commanding less than 1% of the global vehicle market and sporting governance that verges on performance art, simply holds out its hand and dollars fall in.

Negative real yields play a big part here. Steroids for visionaries, they pump up projected cash flows on the far horizon, underpinned by this or that disruptive narrative. One reason oil companies — whose own long-range valuations grow dim under the cloud of climate change — could use a bout of inflation is what it would mean for bond yields and, by extension, valuations for the likes of Tesla. In the meantime, capital gets thrown into a relentless effort to tear down incumbents, with profits not always necessarily required (at least for now).

If this brings up memories of the tech bubble, the energy business has a more recent example: shale. In both instances, lots of people lost money, a few made a lot — and the landscape was transformed regardless.

Post-crisis (permanent crisis?) capital markets, running for more than a decade already and now just given a booster (so to speak), have been a decidedly mixed blessing for oil. Sure, cheap money helped launch millions of SUVs and billions of plastic bags, getting us to 100 million barrels a day. But it also fed the industry’s worst drill-baby-drill instincts, tarnishing its reputation with investors and a growing proportion of society.

More importantly, and paradoxically, cheap money has actually been deflationary for the energy business.

Oil and gas are extractive energies in a race against an emerging system of manufactured or captured energy built around electrons, including solar power and electric vehicles. The latter’s competitiveness, like any widget, is a function of iteration and the capital available to do it (see, again, shale). In short, free money in the hands of true believers is the nemesis of incumbents.

It finances relentless declines in cost. This is the structural deflation that quietly starts a landslide while you’re focused on the next ridge and valley of the familiar cycle. Turn off the spigot of funding for drilling and natural decline rates for oil fields will tend to raise prices, which is great for that short-term trade. Turn off the funding for lithium-ion battery development and you’ll halt further progress — but the 89% drop in costs over the past decade won’t go away. The losses — and bankruptcies — ultimately get forgotten while profitable businesses, tomorrow’s incumbents, are left standing when the smoke clears.

It is because of this gathering race to the bottom that oil and gas producers — be they frackers or Middle Eastern petrostates — must ditch old expectations of ever-lasting rents available to fund drilling budgets or public spending. The cycle remains, but the gradient slopes down.

The biggest weakness of the 90-million-barrels thesis is that the industry itself hasn’t really believed it. Too often, the base assumption is actually 90-million-barrels-plus; or incumbency plus secular growth. When the latter is threatened, it turns out sheer incumbency isn’t enough. What the industry’s long-term strategy should be for dealing with a transition to a non-thermal energy system remains an open question. But its foundation must be spending money like oil is going out of fashion.

Covid-19 didn’t destroy oil’s core demand in 2020, in part because cheap money came to its rescue.

This news is a total 5041 time has been read