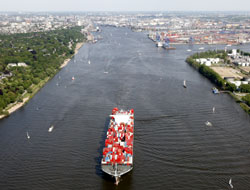 The drop in the Port of Hamburg seems to have bottomed out, with stabilization and recovery expected in the second half of this year.

The drop in the Port of Hamburg seems to have bottomed out, with stabilization and recovery expected in the second half of this year.

An analysis of the major kinds of major seaborne cargo segments handled in Hamburg shows that general cargo, which makes up a particularly large share of the port"s volume, declined sharply by 27.8%, amounting to only 37m metric tons. Since the level of containerization for general cargo in Hamburg is about 97%, this drop affected container transport most of all.

Germany"s largest container port handled a total of 3.6 million TEU in the first half of 2009, representing a decrease of 28.7% compared to the same period in the previous year. However, the slump in cargo throughput had not yet begun in the first half of 2008, which brought Hamburg a volume of 5m TEU and a growth rate of almost 4%. It was not until the second half of 2008 that the worldwide finance and economic crisis began to have massive effects on seagoing cargo transport.

Bulk cargo handling in Hamburg, which achieved a volume of 17.2m metric tons in the first six months of this year, was not hit as hard by the global finance and economic crisis as general cargo and fell by only 13.1%.

In interpreting the cargo statistics, Claudia Roller, the Port of Hamburg Marketing"s chairperson, pointed out that the comparison between the half year figures of the two years gives an incomplete picture. The first six months of 2008 were still a period of growth, while cargo volumes in the first half of 2009 were strongly affected by the impact of the world economic crisis.

She said, "Despite the negative results, the cargo volumes in the first half of 2009 give us reason to be optimistic, since our assessment is that we have hit bottom and cargo handling in the seaport has become generally stable. We are expecting a positive trend in seaborne cargo volumes in the second half of the year. According to the monthly data that we have, we can see that there has been a small gain in container transport since the month of April and up through June and that the downswing has been stopped. We have also been receiving positive signals from representatives of industry and trade as well as from leading managers in the transport and shipping businesses at our port and trade fair events at home and abroad.'

"Investments are continuing and the port and transportation infrastructures are being kept ready to handle a coming upswing. In light of the current worldwide economic situation, with all its uncertainties, I am at the moment hesitant to try to make any definite predictions as to the year end results or further developments in 2010."

This news is a total 2243 time has been read