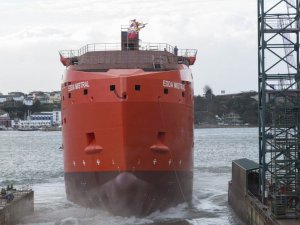 On Saturday, the first Spanish-built service operation vessel (SOV), Edda Passat, was named at Gondán's Figueras shipyard, and the day before, also after the celebration of her naming, sister vessel, Edda Mistral, was launched into the Ria del Eo.

The 81-meter-long, 17-meter-beam sister SOVs, of Rolls-Royce’s UT 540 WP design, are specifically designed and built to operate at wind farms off the coast of the U.K., where the vessels will commence work for Ørsted under five-year firm contracts, plus five one-year options.

Edda Passat, which was launched in Spring 2017, will be delivered in the final week of February for work at the Race Bank wind farm. Edda Mistral will operate at the Hornsea 1 wind farm after delivery in August 2018.

Each DP2 vessel can accommodate up to 40 wind farm technicians, plus a crew of about 20 people.

Each vessel is equipped with an UPTIME 23-meter-long heave compensated “walk-to-work” gangway, a 3D compensated crane and a CTV landing system with bunkering facility. In addition to the gangway, the vessels are fitted with onboard 11-meter daughter craft for the transfer of maintenance technicians to the offshore wind turbines.

Including the two new SOVs, Astilleros Gondán has delivered 13 vessels to Østensjø Rederi since 2005.

This news is a total 576 time has been read
Tags: Østensjø Rederi’s Sister SOVs Named at Gondán