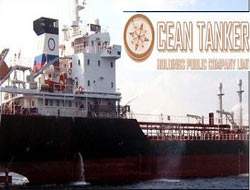 The tanker-oriented company said income reached $68.6 million, versus $11.65 million in 2007, while profit from ship operations surged to almost $8 million, up from $2.9 million in the year before.

Cyrpus-based and publicly traded Ocean Tankers posted healthy results for the year ended 2008. The tanker-oriented company said income reached $68.6 million, versus $11.65 million in 2007, while profit from ship operations surged to almost $8 million, up from $2.9 million in the year before. Net profit for the year reached $6.77 million, against $1 million in 2007. Earnings per share attributable to shareholders of parent company were $4.19, versus $0.65.

In a separate announcement the Chairman and the Board of Directors informed the investing public and the competent authorities of the Cyprus Stock Exchange and the Securities and Exchange Commission that there is no viability problem in the Company and that Ocean Tankers will continue to be an active economic unit, having strong shareholders.

The company explained that the loan of the Chairman and major shareholder, Michalis Ioannides of $30.15 million US dollars is not a short term liability for the Company. Mr. Ioannides" loan is not short-term but it is a long-term loan on the basis of the contract signed between him and the Company.

Its payment off will commence on January 1, 2010 and will end on January 1, 2015 in sixty equal monthly installments of $502,500. The interest rate, including the expenses, stands at 9% and it is at the same level as previous loans. The major shareholder thought it would be necessary to revise its lending into long-term for the protection of the investing public.

It is worth noting that Mr. Ioannides has the option to capitalize his loan to the company in a possible future share capital increase. According to the above, the Company has no liquidity problems and continues to be profitable and active economic unit, said Ocean Tankers.

Ocean Tankers Holdings Public Company Limited is a company focused on modern double hull double bottom oil/chemical tankers. The company owns eight vessels 2 of which are still under construction (newbuildings). Within a year, and since the company"s listed in the Cyprus Stock Exchange (CSE), the company faced a rapid expansion, increasing its fleet from three tankers to eight tankers. All Group vessels are Double Hull and Double Bottom.

This classifies the Group vessels in the family of Double Hull ? Double Bottom tankers. It has to be noted that as of 2007 onwards, only Double Hull tankers will be allowed to enter in European and American ports. The company believes that owning and maintaining a modern Double Hull fleet reduces off time hire and operating costs, improved safety and environmental performance and provide the Group with a competitive advantage in securing employment for its vessels.

This news is a total 3011 time has been read