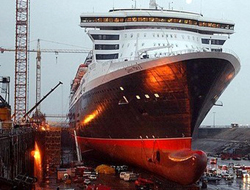 Shipbuilding industry continues its deteriorating trend after the severe plunged in November 2008.

Shipbuilding industry continues its deteriorating trend after the severe plunged in November 2008.

It is reported that shipbuilding industry continues its deteriorating trend after the severe plunged in November 2008. In January 2009, the world together finished 6.353 million DWT shipbuilding and saw the new ship orders posted at 387,500 DWT, down by 11.95% MoM and 97.7% YoY respectively, the whole industry is now trapped in the deep stagnation. While in the domestic market, China's shipbuilders also face several of challenges. Insiders believe the government will strengthen the credit assistance in the upcoming industry stimulus plan, especially for those of the local private shipyards. Among the new ship orders, 4 of them are 75,000 DWT oil tankers and 5 are 17,500 DWT floating crane ships. And the market receives no new order of bulk cargo carrier for 2 straight months and container ship for 3 straight months. Of all the 387,500 DWT new orders, 300,000 DWT went to S. Korea while China received the rest of 87,500 DWT.

By the end of January 2009, the overall ship orders across the world were 572,711,700 DWT, dropping slightly for each of 5 straight months. Meanwhile, it is worthwhile to notice that the new ship price is also declining sharply.

Mr Gao Xiaochun shipping analyst said that though the Baltic Dry Index has increased dramatically in recent days, it won't directly push up the new ship order in the short term. He predicts the total new ship orders would down by 70% YoY, staying at some 48 million DWT and the ship price is likely to dive by over 15%.

Mr Gao said there are many challenges amid the domestic shipbuilding industry, and the government's industry revitalization plan is hopeful to bring positive supports to the industry.

This news is a total 753 time has been read