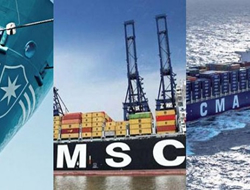 U regulators will investigate whether 14 of the worlds major container shipping companies, including world No. 1 A.P. Moller-Maersk and No. 2 MSC, have been illegally orchestrating price rises for European routes since 2009.

The decision to launch an investigation, announced on Friday, followed raids at the companies in several EU countries more than two years ago. Businesses found guilty of violating EU rules could be fined up to 10 percent of their global turnover. The European Commission’s action comes as the industry continues to grapple with overcapacity in a faltering global economy.

The Commission said in a statement that it is concerned that the companies appeared to be alerting each other of their price increases via press releases and on their websites. Such concerted practices are illegal under EU antitrust rules. “The Commission has concerns that this practice may allow the companies to signal future price intentions to each other and may harm competition and customers by raising prices on the market for container liner shipping transport services on routes to and from Europe,” it said.

It did not name the companies under investigation or say how many are involved but a person familiar with the matter said 14 companies in Europe and Asia have been targeted in the probe, which is expected to take several years to complete.

A.P. Moller-Maersk confirmed it is part of the investigation and said it would cooperate with the authorities. “A.P. Moller-Mærsk A/S has no reason to believe that Maersk Line has behaved in a manner not in accordance with EU competition law,” the company said in a statement.

One of Maersk’s biggest rivals, Germany’s Hapag-Lloyd , which is 22-percent owned by German travel and tourism group TUI AG and was raided by the Commission in 2011, said it had not been notified by the Commission of the latest investigation and declined to comment.

Commission spokesman Antoine Colombani said the investigation is separate from an ongoing review of a planned vessel-sharing alliance by Maersk, MSC and France’s CMA CGM announced in June in an attempt to minimise losses caused by overcapacity and falling freight rates.

“The P3 consortium does not qualify as a merger under the EU Merger Regulation. The relevant rules are the Treaty’s antitrust rules. At the moment we have engaged in discussions with the parties and we are gathering market information,” he said.

Prior to 2006 shipping companies were exempt from EU competition rules to allow them to continue to meet in groups called “liner conferences” to discuss market conditions, freight rates and other issues.

This news is a total 1175 time has been read