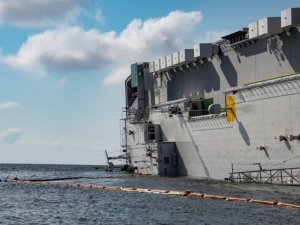 ontainment boom placed at the capsized M/V Golden Ray. Unified Command has deployed more than 5,300 feet of protective boom to limit the impact of discharged fuel on sensitive areas.

Cleanup crews are responding to an oil discharge from the overturned Golden Ray car carrier in Georgia’s St.
The Unified Command confirms that divers were working to locate and secure the source of a discharge that was first reported on Monday afternoon. Skimming vessels are also working to recover oil from the water.
Survey teams, meanwhile, are monitoring for any shoreline impacts.
“The Unified Command has maintained a posture to be able to rapidly respond to any discharges from the vessel, including by skimming, booming, and shoreline cleanup,” said Chris Graff of Gallagher Marine Systems. “We’re now using these preparations to implement a rapid and thorough cleanup of impacted areas.”
Specialists continue to actively monitor air and water quality around the vessel, Jekyll Island, and St. Simons Island.
Salvage workers continue to lighter the vessel and have removed over 74,000 gallons of fuel as of Sunday evening, the Unified Command said in an update.
Approximately 5,300 feet of boom has been deployed to protect sensitive marsh areas and survey teams continue to monitor for and respond to shoreline impacts.
A similar oil discharge was reported on September 27.
Crews have been working to pump and transfer fuel from the Golden Ray’s fuel tanks into a barge to prevent discharges.
As of a September 26, more than 350 responders were working within the Unified Command and more than 70 vessels are engaged in the response.
The pure car and truck carrier (PCTC) Golden Ray was carrying around 4,200 vehicles when it capsized in St. Simons Sound, at the entrance to the Port of Brunswick, early in the morning on September 8, as it was departing the port with a pilot and 23 crew members aboard.

This news is a total 746 time has been read
Tags: golden ray car carrier, Leaks Oil