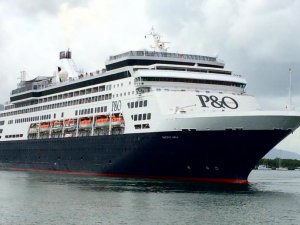 The 55,820-tonne Pacific Aria, carrying her 1500 guests, docked at the Cairns Cruise Liner Terminal and remained in the city overnight. The vessel departed the city on her return journey to Brisbane on December 4.

Pacific Aria is expected to dock in Cairns on two further occasions this year, on December 20-21 and December 30-31.

Her sister ship Pacific Eden will make her maiden call to the city on December 22, in advance of her first season of cruises from Cairns in late 2016.

The two ships are expected to become regulars in Cairns with 17 calls between them in 2016, increasing to 30 calls in 2017.

Pacific Eden will be the first cruise ship to ever be based in Cairns when she sails from the city on a series of nine cruises between September and November 2016, including new seven-night cruises to Papua New Guinea.Pacific Aria2 The ship will return to Cairns in 2017 for a second season of sailing.

“With the growth of our fleet we’ve not only been able to offer more cruises which visit great ports such as Cairns and Port Douglas, we’ve also been able to base a ship in Cairns so that north Queensland residents can enjoy cruises from their own doorstep,” P&O Cruises Senior Vice President, Sture Myrmell, said.

According to industry figures, Queensland is the second biggest source market for Australian cruisers with nearly 240,000 Queenslanders cruising in 2014, an increase of 21 per cent on the previous year.