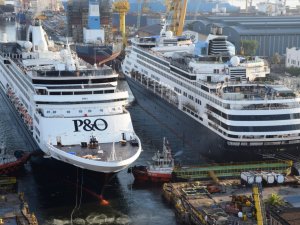 The repair, refurbishment and conversion works of the two cruise vessels were undertaken at the company’s Admiralty Yard, Singapore.

Following the transformation of the ships, P&O Cruises, brand of Carnival Group, announced that Pacific Eden will start her maiden voyage from Fremantle, Australia, and continue cruising from Fremantle in 2016 and again in 2017.

Pacific Eden and her sister ship Pacific Aria will be christened in a dual naming ceremony in Sydney Harbour on November 25.

With the completion of these works, Sembcorp Marine said that its shipyard reached a record of 12 cruise ships repaired in a single year.

“2015 has been a busy year for Sembcorp Marine in the area of cruise ship refits and upgrading,” said Sembcorp Marine Executive Vice President and Head of Repairs & Upgrades Wong Lee Lin.