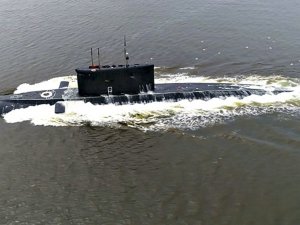 In accordance with the combat training plan, one of the diesel submarines of the Pacific Fleet during the exercise carried out an attack in the Sea of Japan at an anti-submarine strike group and a detachment of ships of a mock enemy.

The submarine, despite the active actions of anti-submarine forces, managed to secretly enter the area and successfully attack the tactical group with two practical torpedoes.

Later on, the submariners decided to attack a detachment of the conditional adversary’s warships, which included the small anti-submarine ships and the Admiral Vinogradov large anti-submarine ship. This episode of training was devoted to drilling the algorithm of actions when launching an attack without the actual firing of torpedoes.