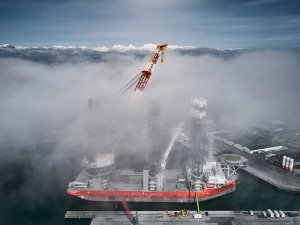 The installation of Pacific Osprey’s new crane boom started in the Port of Esbjerg in mid-April and was completed on 30 May.

The lift of the boom onto the jack-up was executed on 14 April by NOV with the use of two shore cranes and was followed by the installation of the wires and hooks.

After Pacific Osprey passed a series of load tests, the final commissioning phase was executed at the beginning of May and resulted in the obtention of an updated class approval.

In the last days of the project, SBO contracted Semco Maritime to install the hook baskets and hook basket supports, which required the insertion of a steel structure through the vessel’s accommodation.

“It is an amazing time for all of us in the Company and in offshore wind. Pacific Osprey is bringing new force to the offshore wind supply chain and we look forward to seeing her back in operations,” said SBO CEO Mikkel Gleerup.

“Our teams have worked hard in partnership with various third parties to upgrade the crane capacity of our vessel, and I am very proud of the high-quality delivery I have seen from everyone who contributed to this upgrade.”

This January, SBO and Vattenfall signed the final contract under which the vessel will transport and install up to 140 Siemens Gamesa SG 11.0-193 DD turbines on the Hollandse Kust Zuid 1-4 wind farms in the Netherlands.