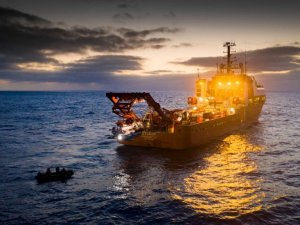 JFD has successfully demonstrated its fully-integrated submarine rescue system during exercises off the coast of Western Australia.

In a range of weather conditions, JFD’s system was used in the triennial Pacific Reach, a multi-lateral series of exercises.

In 2019, the Pacific Reach was hosted by Australia with the participating nations of South Korea, Japan, Malaysia and the United States and many other observing countries from the Indo-Pacific region.

Designed to simulate a real-life submarine rescue emergency using Collins-class submarine HMAS Sheean and South Korean submarine ROKS Lee Sun-sin, Pacific Reach, which this year was held in tandem with the annual Black Carillon exercise, tested all aspects of JFD’s rescue system which includes a free-swimming, piloted submarine rescue vehicle that is designed to locate and “mate” with a disabled submarine and a hyperbaric equipment suite to provide submariners with life-saving medical treatment once they are back on the water’s surface.

This year, along with a series of shallow exercises, the system also successfully completed two deep dives of 400 meters, securing annual certification for this sovereign capability.

This involved six separate exercises as 25 navy personnel rescued 45 submariners with a variety of simulated injuries and conditions and transported them under pressure to the surface for medical treatment in JFD’s world class hyperbaric equipment suite.

“Never before have we tested our system to the very limits of its design capability and I am delighted to say it performed exceedingly well both in its reliability and flexibility,” said JFD Australia’s Managing Director, Toff Idrus.

“It was an extremely long and demanding exercise which included specialist equipment installation and de-mobilization phases and that there were no reportable incidents, accidents or injuries is a clear demonstration of our world-leading safety standards,” he added.

This news is a total 568 time has been read
Tags: Exercise Pacific Reach, JFD, Submarine rescue