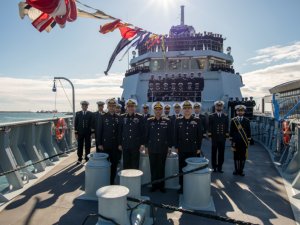 Ordered in 2017, the newbuilding is the first of two Pakistan Navy units based on the offshore patrol vessel (OPV) design of Dutch shipbuilder Damen.

PNS Yarmook was built at Damen Shipyards Galati, a subsidiary of Damen.

Launched in September 2019, the second vessel, PNS Tabuk, is also being built at the shipyard in Galati. It is planned for delivery in May this year.

As explained, PNS Yarmook is capable of performing a variety of maritime operations and can transport both a helicopter and a UAV. The ship can launch two high-speed RHIBs of 11.5 meters and 6.5 meters simultaneously. It has also the capability to accommodate two TEUs for special mission-based operations.

The OPV measures 90 meters in length and can reach a maximum speed of 23 knots.