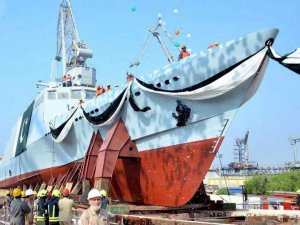 Fast Attack Craft (Missile) is a state of the art, a multi-mission vessel with a steel hull and aluminium superstructure and equipped with indigenously developed weapons and sensors.

Speaking on the occasion, Federal Minister for Defence Production Zubaida Jalal congratulated Pakistan Navy, MTC and KS&EW for the remarkable achievement towards the national goal of indigenisation and self-reliance. She said that KSEW is one of the few public sector industries which have made a remarkable turnaround in the last decade and transformed into a sustainable profit-generating entity of the Ministry of Defence Production (MoDP).

It has a length of 63 meters with a displacement of over 560 tons. The ship is propelled by four diesel and can attain a maximum speed of 30 knots. It has 4 propulsion shafts ad fixed pitch propellers and a range of 1000 nautical miles.

FAC(M)-4 relies on combined diesel-and-diesel (CODAD) for propulsion. In addition to ASCMs (configured in a dual triple-cell system), the FAC(M)-4 will be equipped with a 25 mm gun, close-in-weapons-system (CIWS), and various sensors, including a surface, search and tracking radar.

The ceremony was attended by a large number of high ranking officials and dignitaries from federal and provisional governments, Pakistan Navy and KS&EW.