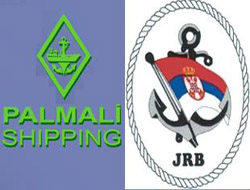 Participating in the tender were 12 large companies from Germany, Hungary, Cyprus, Romania, Russia, Serbia, Bulgaria and Switzerland. Talks on signing of the agreement to purchase JRB, Belgrade will begin on 5 February. Established in Belgrade in 1947 Jugoslovensko Recno Brodarstvo has a fleet of 210 tankers and controls over 90% of deliveries via the Dunay.

The PALMALI is involved in cargo deliveries in the Mediterranean, Caspian and the Black Sea Basin. It is the largest transportation company in Russian internal waters with a fleet comprising over 120 owned and leased
PALMALI is an exclusive transporter of oil and oil products exported by the State Oil Company of Azerbaijan from Ceyhan Port via Baku-Tbilisi-Ceyhan pipeline. PALMALI takes a responsibility for the distribution of the agreed tonnage for the transportation of the oil and oil products from Ceyhan Port to all points of the globe.

In 2008 PALMALI plans to build a new ship-building plant in Turkey.

This news is a total 2340 time has been read