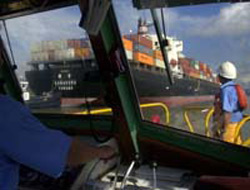 THE Panama canal is struggling to control major congestion as transit times nearly double to a record 53 hours, while this week?s backlog averaged 93 vessels.

THE Panama canal is struggling to control major congestion as transit times nearly double to a record 53 hours, while this week"s backlog averaged 93 vessels.

Queues have eased little from their peak in March, when 119 vessels waited as long as eight days to transit the major trade artery.

That is despite a series of measures to address the backlog, which has occured during its busiest time of the year.

Ships currently face a minimum four-day wait for the 80km journey through the canal. But more alarmingly, the journey time has risen by nearly 20 hours in one month, and now takes an average of 53 hours, based on March operational figures.

That compares with February"s canal transit time of nearly 30 hours, and 27 hours for the same period last year.

The canal has been dogged by these problems since February, when ship arrivals began to rise above the canal"s advertised capacity of 38 transits daily.

Local agents have suggested that an industrial dispute between the canal authority and pilots that help ships transit the canal may be responsible.

Pilots have emarked on "work-to-rule" measures which have slowed down canal water transit times and lengthened queues, according to agents.

The Panama Canal Authority said the congestion is solely due to greater than anticpated vessel arrivals. Panama"s pilot association has declined to comment.

?Things will improve (next) week. There is definitely a downward trend,? said an authority spokeswoman. Queues would be reduced to 80 ships next week, she said.

The authority abandoned critical maintainence work on two canal locks on March 14 to deal with waiting vessels and push up the number of transits.

Later in the month the authority then reduced booking slots, but both moves have been without significant impact.

An authority spokeswoman said the queues reflected the canal"s March to April peak season, with up to 49 ships arriving each day this week. Grain from South America has boosted cargoes, she said.

In canal operational updates, shipowners have been told the queue may not be reduced for a further month, as late as mid-May.

?We"ve had this problem for the last few years as ships get bigger, they take more time to transit,? the spokeswoman said.

This news is a total 815 time has been read