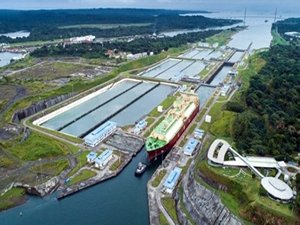 This is being done to support the shipping industry at a time when the canal is experiencing declines in traffic due to blank sailings and the lack of the cruise ship business.

Begun in May, and originally announced to last until September 1, the relief measures include the suspension of advance payments for transit reservation fees and other changes to the waterway’s reservation system. Together, they allow customers to maintain higher liquidity, as well as added flexibility for swapping or substituting booking slots among their own fleets.

“Despite the challenges faced earlier this year, I am confident we will see a steady recovery going into our 2021 Fiscal Year for both the Canal and its customers,” said Panama Canal Administrator Ricaurte Vásquez Morales.

According to figures released by the Panama Canal Authority, transits increased from 845 in June to 933 in July, and August is showing a similar trend. They said the increase was largely driven by a surge in containership transits along the U.S. East Coast to Asia route.

“I am encouraged by the growth we are seeing for the container segment, though we are tracking changes in global trade flows vigilantly,” said Deputy Administrator Ilya Espino de Marotta. “The extension of these measures underscores our commitment first and foremost to our customers.”

While there is some seasonality to the canal traffic, typically the late summer sees a surge in shipments as retailers prepare for the busy fall period when consumers are buying for the holiday season. Cruise traffic at the canal also sees a spring and fall increase as cruise ships traditionally reposition seasonally between the Caribbean and Alaska and during the winter when cruise lines operate cruises through the Panama Canal. In June. the Panama Canal Authority reported that it had experienced 45 fewer cruise ship transits in 2020 versus 2019.

The Panama Canal experienced a decline each month in the start of 2020. January was its peak with 1,283 transits falling to 1,226 in February and 1,210 in March. The largest decline came in April where the traffic level fell to just over 1,000 transits, prompting the Canal Authority to introduce the current relief measures for shippers.

This news is a total 2652 time has been read
Tags: Panama Canal Extends Relief for Shippers to Assist in Traffic Decline