Panama Canal sticks to May 1 rise 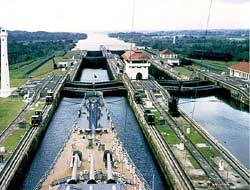 The Panama Canal Authority is sticking to its scheduled May 1 toll increase.

The Panama Canal Authority is sticking to its scheduled May 1 toll increase.

The Panama Canal Authority is sticking to its scheduled May 1 toll increase in the face of plans by some of the world's largest container lines to route their vessels the long way around the Central American isthmus. "We have scheduled the toll increases that were agreed upon after a long period of consultation with the industry in 2006," Rodolfo Sabonge, the canal authority's director of corporate planning and marketing, said in an interview. "We make sure that everybody knows long ahead of time what we're doing. That has a lot of stability for the shipping industry and the shippers themselves."

His comments came in the wake of CMA CGM's decision last week to route the homebound leg of its PEX2 service linking Asia to the Caribbean on a longer - but less expensive - trip around Africa's Cape of Good Hope.

"Even after we add a tenth vessel of 4,000 TEUs to the PEX2 service, we will save more than $200,000 by returning to Asia by traveling east around Africa," Laurent Falguiere, CMA CGM Group vice president of Caribbean and Latin American lines, told The Journal of Commerce last week.

"Our calculations do indicate that it might very well be beneficial to go south of the Horn with some of our vessels," Morten Englestoft, chief operating officer of Maersk Line in Copenhagen, said in a telephone interview earlier this month. "Given the significant cost of going through the (Panama) canal, we have to explore all the alternatives."

Sabonge said the carriers have the right to use alternate routes around Panama, but that the detours being adopted by major carriers are only temporary because of the drop in the price of bunker fuel, the current lack of demand because of the world economic slump and the overcapacity of container ship tonnage hanging over the industry.

Both the canal authority and the carriers have been unusually public in publicizing their positions on the tolls. Both sides in the normally closed-mouth industry have reached out to the trade media to assert their views.

Sabonge said the scheduled May increase in tolls would amount to about $20,000 per transit for a container ship of the size that CMA CGM deploys on its PEX2 service. On its last transit through the canal, the CMA CGM Capella, which is part of the PEX2 service, paid a total of $272,535, including tolls and other canal charges such as tug and pilot fees, he said. That total will increase to $292,535 after the May increase, he said.

"We feel we are still the best choice and will remain competitive even after the planned increase that is scheduled for May," Sabonge said. "What CMA CGM is doing now is something all lines should be doing - analyzing different alternative sand making sure they are acting in their best interest.