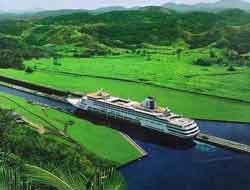 THE Panama Canal Authority (ACP) it has published its proposal to restructure the Panama Canal's pricing system and certain regulations, with some “slight” changes reflecting input from the shipping industry.
PANAMA CANAL MAKES SMALL CHANGES TO PRICING PROPOSALS

The Board of Directors of the Panama Canal Authority (ACP) announced today that it has published its proposal to restructure the Panama Canal's pricing system and certain regulations.

On February 2, 2007, the ACP announced its desire to move toward a charge that reflects the commercial value of the service and route. After a 30-day public consultation period, the ACP conducted a hearing on March 14.

The proposal announced today has been slightly modified from the February proposal: At the request of the industry, implementation of the new charges has been postponed from May 2007 to July 2007.

Due to this modification, the ACP today is reopening the issue for public comment and will consider additional input, suggestions and feedback from interested parties over the next 15 days.

After receiving comments and feedback from the maritime and shipping industry during its official consultation period, the ACP responded to industry requests by changing the proposal and postponing implementation of the new pricing. Moreover, with this proposal, the ACP is providing its customers with guaranteed pricing to 2009 -- something no one else in the industry does.

"This open and transparent process has given the ACP an opportunity to further understand the needs of the industry. They told us that they wanted the timeframe for implementation extended, and we listened," said ACP Administrator/CEO Alberto Aleman Zubieta. "We look forward to continue providing our customers with a safe, reliable and efficient service, at a price that captures the true value of the route and service."

The ACP's proposal to restructure its pricing system and certain regulations reflects an effort toward charging its customers the market price of the Canal's service today. As the world becomes more interconnected -- barriers dropping, tariffs reduced -- the value of the Panama Canal and its role in the global supply chain continues to grow. Shippers moving goods from the U.S. Gulf Coast to Asia can save up to 10 voyage days via the Panama Canal, and vessels traveling from the West Coast of South America to the U.S. East Coast shave an estimated eight to 16 voyage days compared to alternative routes. Given the cost increases in shipbuilding, fuel and vessel operations, the route through the Panama Canal has significantly increased its value to its users.

After the ACP's Board of Directors reviews the comments received during the 15-day period, it will make a final decision and submit its recommendation to the Cabinet Council of the Republic of Panama for approval.

Prior to this announcement, the ACP held a consultation period (February 2, 2007 -- March 12, 2007) and made the proposal available to all interested parties. The ACP received a total of 21 written submissions, in both English and Spanish, from individuals and groups. The consultation period culminated with a public hearing in Panama in which 14 representatives from shipping and government expressed their views during this open and transparent process.

The official proposal can be accessed, in English and Spanish, at http://www.pancanal.com/. Significant elements include:

This news is a total 7490 time has been read