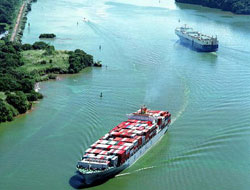 THE Panama Canal Authority is looking to put debt finance in place for $2.3bn by the end of the year, a figure at the upper end of its borrowing forecast, according to ACP administrator Alberto Aleman.

THE Panama Canal Authority is looking to put debt finance in place for $2.3bn by the end of the year, a figure at the upper end of its borrowing forecast, according to ACP administrator Alberto Aleman.

Under its expansion plan proposal the ACP had said it would need to borrow between $1.5bn and $2.3bn to cover the shortfall between revenues and capital expenditure between 2009 and 2011.

?We are looking at about $2.3bn in financing for this project,? Mr Aleman told a Latin American Investors" conference. ?We are negotiating at this time with the banks to achieve the best package possible for the authority.?

The total cost of the expansion project is $5.25bn, with most of the project being covered by internal resources.

Toll increases lifted annual revenues last year to $1.76bn and planned incremental adjustments of around 10% a year are expected to lift that figure to $2bn this year.

But the difficulties being felt in the US, which accounts for 65% of Canal traffic, is beginning to show signs of affecting volumes passing through the waterway.

Total volumes fell by 2% to 79m Panama Canal Universal Measurement System tonnes in the first quarter of fiscal year 2008 (October to the end of December), compared to 80.6m PC/UMS tonnes in the same period last year.

Mr Aleman, however, said he was confident that the crisis in financial markets would not have a major impact on Panama"s ability to borrow the funds required to complete the project.

?The canal (has) very good credit, now there is a flight to quality projects and the canal is one of those projects,? he said.

Multilateral development banks have already committed themselves to the project, months ahead of the deadline to have a decision in place.

The Inter-American Development Bank has said it will take almost 20% of the debt, offering $400m for the project. More than 40 private investment banks have also expressed their interest in participating.

Japanese investment bank Mizuho has been appointed alongside Shearman & Sterling to advise the ACP through the process.

A final decision is required by the third quarter of 2008, ahead of the project to build the new set of locks, the most expensive aspect of the $5.25bn.

On the upside there are positive signs that the Panamanian economy may be on the verge of securing an investment grade rating, something that would help reduce the cost of the debt package.

?Panama"s credit story continues to develop in a positive direction, with growth exceeding 8% for a second year in a row, which has contributed to the convergence of per capita income with that of low investment grade sovereigns,? said Theresa Paiz Fredel, senior director in Fitch"s Latin American Sovereign Ratings team.

This news is a total 1955 time has been read