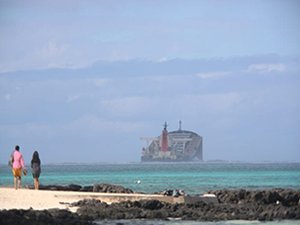 The Panama Ship Registry said it “deeply regrets” the grounding of the Japanese-owned and Panamanian-registered MV Wakashio in Mauritius and subsequent oil spill.

In a statement, the Panamanian Ship Registry said it is conducting the relevant investigations under the rules of the Code for the Investigation of Marine Casualties and Incidents.

The Panamanian Registry has provided information about the vessel and its history prior to the date of the accident.

The ‘Wakashio’ is a double-bottomed Newcastlemax bulk carrier designed for the transport of heavy cargo, was built in 2004 by Universal Shipbuilding Corporation in Japan. The vessel was incorporated to the Panamanian Registry on March 29, 2007, and has all its valid technical certification, issued by the NKCLASS (Nippon Kaiji Kyokai) Classification Society, a statutory certification valid until April 22, 2021, when it must undergo its cycle of inspections for due renovations, according to a statement from the ship registry.

“The last Port State inspection was conducted in Port Hedland, WA, Australia, the 14th of February 2020 and the last flag inspection was completed in Kawasaki, Japan, 1st of March 2020. Both inspections were equally successful. Therefore, the ship, both in its structure and equipment, complies with the International Conventions established by the International Maritime Organization (IMO),” the statement said.

he MV Wakashio, owned by Japanese shipping Nagashiki Shipping Co, was without cargo when it ran aground on July 25 at approximately 1925LT off Mauritius’ Pointe d’Esny during a voyage from Singapore to Brazil. The ship was initially reported stable, but its condition deteriorated in bad weather resulting in a breach of a bunker tank on August 6, leading the Mauritian government to declare an environmental emergency.

With a large crack appearing in the ships hull, it is now in danger of breaking up along the reef.

The statement from the Panama Ship Registry provided also some additional details from the doomed voyage.

“The ‘Wakashio’ was manned by twenty (20) persons of different nationalities; as far as information could be obtained, all of them carried the proper certificates required for their positions and responsibilities on board, as required by the International Convention on Standards of Training, Certification and Watchkeeping for Seafarers and the insurance policies relating to pollution prevention; and as for civil liabilities, they are still in force and all were issued by The Japan Ship Owners’ Mutual Protection & Indemnity Association,” the statement said.

“On 14 July 2020, the bulk carrier sailed from Singapore (Offshore Terminal) to Tubarao, Brazil. Everything went smoothly until July 25, when the ship faced adverse weather conditions near the coast of Mauritius. It was then, necessary to perform various maneuvers to change course due to the state of the sea. All maneuvers were supervised by the captain and first officer of the ship who were aware of the situation and weather conditions; At 19:25hrs of the same day, while on the bridge, the captain, the first officer and the chief engineer noticed that the ship stopped moving and that it was stranded, in a latitude position: 20°26.6S and longitude: 057°44.6E, notifying the parties concerned (flag of the ship, ship operators and local authorities),” the statement added.

As gCaptain reported previously, a police investigation into the grounding has been launched. According to the Mauritian authorities, the National Coast Guard (NCG) Radar Operators first spotted the Wakashio when it was 11.5 nautical miles offshore and took a “series of actions” to contact the vessel without success. It wasn’t until after the grounding that the Master communicated that the ship had last control and grounded. No MAYDAY or distress signal was ever sent.

This news is a total 2570 time has been read
Tags: Panama Ship Registry Addresses Wakashio Grounding in Mauritius