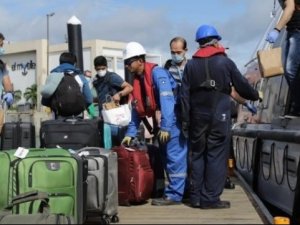 The Republic of Panama has been gaining recognition for its efforts to help facilitate crew movements, which became especially challenging during the current public health crisis.

However, the Panama Maritime Authority (AMP) is also garnering criticism for steps it has taken regarding crews working on ships in its registry.

Panama recently facilitated several crew changes and reparation efforts that generated visibility. For example, Panama permitted Carnival Cruise Line to transfer 91 crew across the Isthmus from one cruise ship to another as part of the cruise line’s reparation program. Panama also permitted on humanitarian grounds a crew change to take place for a crew that has been stranded in Panama on a Hong Kong-flagged tanker.

The Panama Maritime Authority highlights that Panama has been supporting crew changes including ship-to-ship, groups, and Isthmus transfers, as well as disembarkation of crew members for repatriations through charter flights. It says that it recognizes that seafarers are essential workers who have been invaluable during this global health crisis by not stopping the supply chain. Between March and early June, AMP estimated that it assisted more than 4,000 people with its humanitarian efforts.

The International Maritime Organization (IMO) congratulated the Panama Maritime Authority for its efforts, saying in a letter from Secretary-General Kitack Lim, “I wish to commend Panama’s efforts to facilitate crew changes.” Lim went on to cite Panama and Liberia’s support as two of the largest flag states for the IMO’s framework for crew changes.

In a joint statement issued at the beginning of May, Panama and Liberia said they strongly supported that IMO circular on crew changes and travel. “Liberia and Panama support the careful facilitation of the world’s seafarers conducting safe crew changes. Both Panama and Libera call upon other flag states to join them in their support of these protocols and for adding their voice to this important call.”

The AMP also said to achieve the goal of facilitating crew changes, and with the endorsement of the Ministry of Health of Panama, it would be distributing instruction handbooks for the shipping lines and other involved parties, providing standardized forms as part of the process.

While these efforts have garnered recognition, the maritime union Nautilus International is now calling for all Panama flagged ships to be targeted for inspection by port state control authorities for potential breaches of the Maritime Labour Convention. Nautilus is citing a June notice from the Panama Ship Registry which it says advises that seafarers' contracts can now be extended by a further three months and up to 17 months where crew change is not possible due to the outbreak of the Covid-19.

Calling this an “inhumane extension of seafarer contracts,” Nautilus said, ”PSC should immediately target all Panamanian ships and detain for breaches of the MLC! This is utterly shameful and inhumane,” according to Nautilus International general secretary Mark Dickinson.

Nautilus, like most nautical organizations, has repeatedly warned that fatigued crews working for months after they were supposed to return home pose a threat to shipping safety and protection of the environment.

The involuntary extension of crew contracts, required because the shipping lines cannot complete crew changes, is one of the primary issues that organizations ranging from the IMO to the International Transport Workers’ Federation have singled out. Indeed’ the ITF in a statement it issued with the Joint Negotiating Group, along with the International Chamber of Shipping, on June 22 said that after contract extensions into May and now June that seafarers cannot be compelled to continue work and that once a ship is safely in harbor, they have the right not to extend.

hile Panama is supporting crew changes, it's policies as a flag state appear to contradict the efforts underway in the shipping industry to broadly facilitate changes for crew members who have fulfilled their contracts and are overdue to be replaced so that they can travel home.

This news is a total 1260 time has been read
Tags: Panama's Crew Change Policies Receive Praise and Criticism