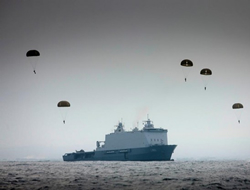 Parachutists with Royal Netherlands Marine Corps being dropped above the EU NAVFOR flagship, HNLMS Johan de Witt, in the Gulf of Aden.

The marines are part of the Enhanced Boarding Element of HNLMS Johan de Witt, which is deployed with the EU Naval Force Somalia – Operation Atalanta counter-piracy mission off the horn of Africa and Indian Ocean.

EU NAVFOR says that the para jump is a unique capacity to fight piracy because there is no need for the warship to schedule a harbor visit to pick up the marines, instead they can carry on with their operational program, while the marines deploy through a para jump.

Marines of the Netherlands Defence Para School and Guardian Angels of the United States Air Force, also stationed in Djibouti, supported the para jump exercise. They jumped out of an American C130 aircraft of the Combined Joint Task Force Horn of Africa, stationed in Djibouti.

After two so-called “sticks” with a static line, several free fall jumpers jumped out of the craft, including a tandem jump which can be used to deploy someone who is not a trained paratrooper, like a doctor or interpreter for example. 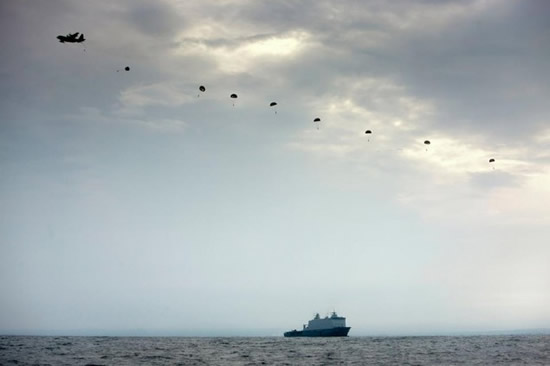 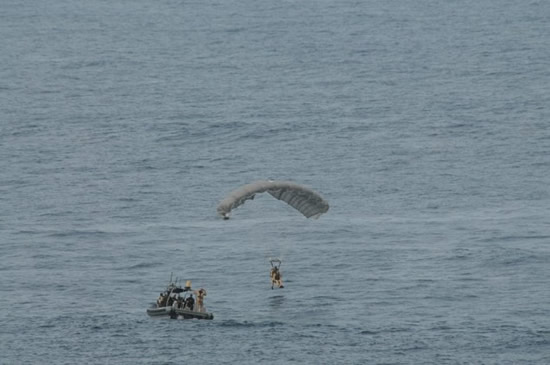 This news is a total 1627 time has been read