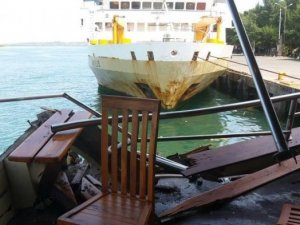 The ship, carrying 64 crew and 46 passengers on board, proceeded southward with high speed to the pier and suffered blackout and propulsion failure. The vessel adrifted with high inertia and crashed into the dock. The ship Wilis proceeded to berthed passenger ship KLM Sea Safari VII and smashed in her stern, which respectively hit the next Japanese fishing boat Ryoyoshimaru No 08. All the three ships suffered significant damages of the hulls, but remained afloat without reported water ingress.

As a result of the accident, the passenger ship KLM Sea Safari VII suffered damage at the stern, as well as starboard fore. The Japanese fishing boat Ryoyoshimaru No 08 suffered damages in the relling the starboard bow section.

The passenger ship Wilis was more seriously damages with breached above the waterline. Fortunately there were no injuries and reported water pollution, as all the damages are only material.

In the agreement of both parties the Japanese fishing boat Ryoyoshimaru No 08 will be compensated for the damage by PT Pelni, which is the operator of the passenger ship Wilis, with 6.5 million Rupee (100,000 USD). As for the passenger vessel Sea Safary VII all the recovery costs will be charged to PT Pelni as well.

“The Passenger ship Wilis has been reconciled and agreed to provide compensation”, said the police chief, Kompol Gatra.

This news is a total 937 time has been read
Tags: Passenger ship Wilis smashed over berthed vessel KLM Sea Safari VII at Benoa Harbor in Bali