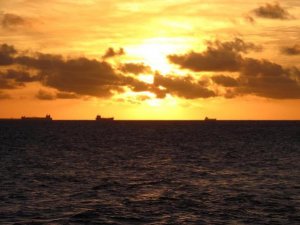 PDVSA, who is facing delays to load and discharge tankers at its main crude port, Jose, will receive the cargo at the neighboring island of Curacao where it operates a storage facility, according to Thomson Reuters vessel tracking data.

The number of tankers waiting to load and discharge at PDVSA’s Bullenbay terminal in Curacao has fallen in recent days, the data say, but it has not eased around Jose.

The tanker Krymst was loaded with 500,000 barrels of West Texas Intermediate crude at the U.S. Gulf Coast on March 28. It will arrive in Curacao on Wednesday.

The tender, along with another spot purchase of crude from PetroChina, will double PDVSA’s crude imports during the second quarter to some 95,000 barrels per day (bpd) that will be used for refining and also to dilute Venezuela’s extra heavy oil output.

PDVSA, who started importing U.S. oil in January, is also about to discharge another U.S. crude cargo on tanker Ridgebury Sally B, which was loaded on March 28. Seller of this cargo is still unknown.

Even though waiting times at Bullenbay have fallen allowing a bigger number of tankers to enter the terminal in recent days, the accumulation of vessels around Jose has not significantly decreased, according to Thomson Reuters data.

Some 18 vessels were waiting to load crude or discharge diluents at Jose as of April 6, the data say, including a dozen tankers for exports and three for imports.

The delays caused a 7 percent decline in Venezuelan crude exports to the United States last month.

The tanker Orpheas, carrying 500,000 barrels of WTI bought by PDVSA from French Total, discharged on April 4 after a 13-day wait.

This news is a total 11886 time has been read
Tags: PDVSA to Receive First U.S. Crude Cargo from BP, Backlog Eases Around Curacao