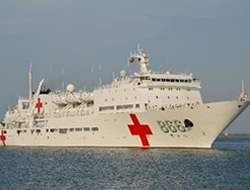 Since its arrival in Tacloban city in Leyte province of Philippines, the "Peace Ark" has used a forward hospital as the pivot and the hospital ship as the major platform.

Integrated forward medical detachments and medical visits, as well as ship-borne medical helicopter transfers of the sick and the wounded evacuation. reports 'China Military Online'.  The "Peace Ark" hospital ship of the Navy of the Chinese People's Liberation Army (PLAN), which arrived in Philippines to carry out rescue operations, has thus far accepted 877 wounded people for treatment, assisted the examination of 642 people, performed surgeries for 25 people, exterminated insects over an area of 10,000-plus square meters, and disinfected an area of 3,150 square meters since its arrival.

Dana Van Alphen, WHO disaster rescue regional advisor and her party totaling 9 people visited the hospital ship and the forward hospital set up on the ruins of the Leyte provincial hospital, where she conducted exchanges with medical personnel and local patients receiving treatment there. According to 'China Military Online' Dana Van Alphen expressed positive recognition of the humanitarian medical assistance that the "Peace Ark" is providing in the Philippines.

This news is a total 1281 time has been read