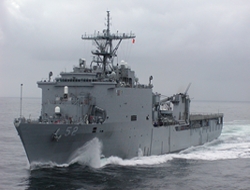 Sailors aboard dock landing ship USS Pearl Harbor (LSD 52) man the rails as a tugboat assigned to Naval Station Pearl Harbor guides the ship into Pearl Harbor. USS Pearl Harbor is currently in port to honor those who valiantly fought to defend the island of Oahu during the attack on December 7, 1941. U.S. Navy photo by Mass Communication Specialist 1st Class James E. Foehl

USS Pearl Harbor (LSD 52) departed Naval Station San Diego on March 28 to begin their role in a U.S. Navy Task Group conducting Partnership of the Americas (POA) 2007. POA 2007 is a U.S. Naval Forces Southern Command deployment designed to support the U.S. Southern Command engagement strategy of enhancing relationships with regional partner nations through a variety of exercises and events at sea and on shore throughout Latin America and the Caribbean.

“This upcoming deployment is an excellent opportunity to train with maritime services from Central and South America,” Cmdr. Victor Cooper, Pearl Harbor’s commanding officer said. According to Lt. Cmdr. Daniel Caldwell, Pearl Harbor’s executive officer, POA 2007 is a perfect opportunity for all hands to learn about each country’s naval traditions and capabilities, which will help everyone work together in any operation. “I hope that all the participating nations get a better understanding of how we operate, and with this understanding we will all be able to increase cooperation in the future,” Caldwell added. “Not only will the participating countries learn from us, but we will be learning from them as well.”

The task group, led by Capt. Randall Snyder, Destroyer Squadron (DESRON) 40 commodore, will be composed of the Pearl Harbor; Chilean Frigate Almirante Latorre (FFG 14) out of Valparaiso, Chile; USS Mitscher (DDG 57) out of Norfolk; and USS Samuel B Roberts (FFG 58) out of Mayport, Fla. During POA 2007, the ships will participate in several exercises as they sail around South America, including UNITAS and Teamwork South. Both series of exercises are designed to train participating navies in a variety of maritime scenarios, with each operating as a component of a multinational force to provide the maximum opportunity to improve interoperability. Another part of the deployment will be a variety of Theater Security Cooperation (TSC) events in the Caribbean and Central America. TSC encompasses military-to-military cooperation, humanitarian assistance, disaster relief, combined training, exercises and operations, intelligence sharing and maritime security assistance within the region to achieve common goals.

The deployment will conclude with participation in PANAMAX 2007, an annual exercise designed to assist the government of Panama in protecting the sovereignty and security of the Panama Canal. Many of Pearl Harbor’s Sailors, including Operations Specialist 3rd Class (SW) Anton Allsop are looking forward to visiting a new continent. “This will be the second deployment of my Navy career and I’m excited,” Allsop said. “I went to the Persian Gulf last time, and now I can’t wait to see South America. This is why I joined the Navy.” Pearl Harbor is the last of the Navy's four new cargo variants of the Whidbey Island class of landing dock ships. It is the first ship to carry the name Pearl Harbor, commemorating the heroic actions of members of the armed services and citizens of the Island of Oahu on Dec. 7, 1941.

This news is a total 967 time has been read