Peel ports braces itself for slump 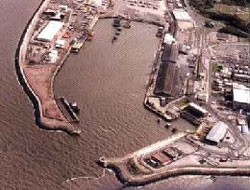 Mersey Docks operator Peel Ports is bracing itself for a downturn following an alarming slump in international trade.

Mersey Docks operator Peel Ports is bracing itself for a downturn following an alarming slump in international trade.

Mersey Docks operator Peel Ports is bracing itself for a downturn following an alarming slump in international trade. The company says it will be ready to reckon up the impact of the global shipping crisis on port operations in the first quarter of 2009. Container shipments have shrunk after three decades of solid growth while demand for raw materials has plunged 94% in six months.

However, the Port of Liverpool operator is hoping that its diversity of services will help it through the industry's toughest period for many years.

Marketing manager Frank Robotham said: ?We are not immune from the effects of a slowdown by any means, but the diversity of the port may mitigate the impact.

?If we were just a container port it may be another matter but we offer a number of services such as ro-ro and various types of import and exports.

?It is difficult to say just what the impact will be at the moment. Our financial year doesn"t end till next March, so the position will be clearer by then.?

Many container lines, including Maersk, which has a base in Liverpool, are now laying up vessels with freight rates dropping through the floor. Chief commercial officer Hanne Sorensen said eight ships had so far been parked: ?The financial crisis and economic slowdown has an impact on all of us.

?Today we are faced with a market situation characterised by uncertainty.

?Container shipping is an integral part of world trade and therefore is impacted by the downward trend. As the industry leader, Maersk Line is fully aware of the tough times to come.?

The impact has already seen the laying off of 34 out of 45 workers at Seaforth"s recently completed fresh produce terminal.

In addition, port businesses face backdated tax bills that have already led to the winding- up of stevedoring firm Thomas Nichols Brown. It faced a rates bill of £1.3m. Lobby group Mersey Maritime believes many more companies are under threat from the tax timebomb.

Dave Pendleton, business development director, said the backdating had to sit as a liability on company accounts, whether they have 10 days or 100 years to pay: ?There will be more casualties, we don"t know where or when.?

This news is a total 998 time has been read