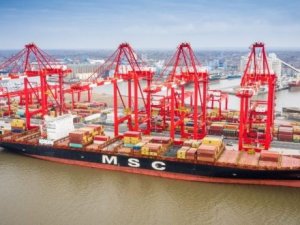 Peel Ports is celebrating a record-breaking month for its container operations at the Port of Liverpool.

Quayside and landside throughput in October at its Liverpool container terminals exceeded all previous figures on record, with year on year growth of 12%.

The cargoes were connected with a total of 16 shipping lines.

Peel Ports, the UK’s second largest port operator, has also managed to reduce the length of time trucks are spending at the port. The average truck turnaround time at the Port of Liverpool is now consistently below 40 minutes, a UK leading service standard.

“More businesses are realising that it makes more sense to ship products closer to their end destinations. For much of the UK container market Liverpool is the port that offers the shortest supply chain, helping to reduce costs, congestion and carbon emissions. It’s testament to the efforts of our whole team that we’re able to significantly increase traffic at the port while also providing our customers with an excellent service.”

Jon Whitely, Managing Director of JWT Haulage, one of the biggest haulage companies in the North West, said:

“The Port of Liverpool’s latest throughput figures prove that Peel’s focus on road haulage efficiency is working. Thanks to the infrastructure and processes in place at Liverpool, drivers are able to spend less time inactive and more time focusing on the safe, timely delivery of containers to customers across the UK.”

Peel Ports recently entered into an agreement with global terminal business, Terminal Investment Limited Sarl (TiL). The proposed joint venture involves the development of the Liverpool2 container terminal and will enable Peel Ports to accelerate its ambitious growth plans.

Work has already commenced on the second phase of the Liverpool2 project development to provide additional capacity for the expected increase in volumes.

The next phase of development at the Liverpool2 deep-water container terminal will see the arrival of STS cranes before the end of the year, with the overall project expected to be completed during 2021.

The multi-million pound project will significantly increase the footprint of the site and see the addition of ten cantilever rail mounted gantry cranes (CRMGs) and three ship-to-shore cranes (STS).

This news is a total 520 time has been read
Tags: CONTAINER VOLUME, PEEL PORTS