Petkim ready to be sold to buy 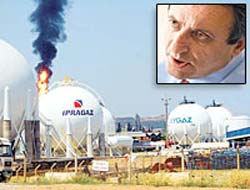 The privatization process for Petkim, a major state petrochemical company that is the latest company to go under the hammer as part of the government's privatization initiative...

The privatization process for Petkim, a major state petrochemical company that is the latest company to go under the hammer as part of the government's privatization initiative, was kicked off last month after two failed attempts, sparking excitement among many domestic and foreign companies.

The company meets 30 percent of the country's $6-billion demand for petrochemicals and has great potential, since it also one of the largest such companies in the region. Petkim General Manager Kenan Yavuz gave an exclusive interview to Today's Zaman and assessed a wide variety of issues, from privatization to overseas investments.

"Petkim is producing 3.2 million tons [of petrochemicals] a year, and sells 1.9 tons abroad," said Yavuz, adding that they don't have enough processing plants to meet current demand. "Many plants are inoperational now because they have broken down, or for other reasons. This means new plants must be established. If Petkim weren't here, there would be a [petrochemical] black market in Turkey," Yavuz claimed.

He believes petrochemical companies from the Far East and the Middle East are threatening the rest of the world as they are now enjoying huge investments. By 2020 companies in Saudi Arabia, Iran, Qatar, Kuwait, the United Arab Emirates (UAE), Israel, Egypt and Algeria will net a total of $300 billion in investments, he noted.

"Almost all Western developed countries are either investing in these countries or establishing strategic partnerships. The petrochemicals trade is now almost 6 percent of total global trade, and it is estimated that this rate will reach 10 percent by 2010." Yavuz added that the demand in Turkey, however, is increasing more than in the rest of the world. If the demand continues to grow at the existing rate it will reach $13 billion by 2015, he forecast.

Petkim has almost completed its restructuring process after heavy spending last year and welcomed 2007 with an increased capacity, Yavuz said. New investments increased the capacity exploitation of the company to 94 percent.

He also touched on the recent hikes in oil prices and emphasized that they increased the costs of raw materials by 30 percent, but that despite this the prices of petrochemical products have only risen 5 percent. He said the company overcame this imbalance to a great extent by increasing productivity. The company announced a $180 million loss in 2003, but by 2006 the company posted profits of $136 million despite high oil prices.

The company, moreover, achieved this success with fewer workers, another measure for the rise in productivity. The company employed 4,600 in 2003 but the number fell to 3,550 in 2006.

Global giants in queue for Petkim

The Privatization Administration (Ö?B) is preparing to sell 51 percent of Petkim after it started the process by placing large advertisements in newspapers March 16. Of these 51 percent shares, 44 belong to the Ö?B and the remaining seven to the Pension Fund (Emekli Sand???). The deadline for preliminary applications is May 14 and the accepted companies will be able to submit their offers until June 15.

The first company that declared interest in Petkim was Akkök, a conglomerate belonging to the Dinçkök family. Turcas Petrol and Azerbaijan's state-owned oil company Socar are also preparing to bid on the privatization tender. Qatar Petrochemical Company and Saudi Basic Industries Corp. (Sabic) are other interested companies.

It is reported that these two companies have opened offices in Turkey to be able to closely follow Petkim's privatization process. Ofer Group, whose name was a subject of fierce discussion after they won the cancelled Galataport tender, is also among the interested parties.

Petkim announces YTL 50.1 million net profit in Q1
Petkim announced an YTL 50.1 million net profit in the first quarter of 2007. Petkim sent a written release to the ?stanbul Stock Exchange (?MKB) detailing the company's first-quarter results. The company's net profit for the same period in 2006 was YTL 3 million. Meanwhile, the Turkish Petroleum Refineries Corporation (TÜPRA?) also announced their 2006 annual report. According to the report, the company processed 26.2 million tons of crude oil at four refineries last year. Some 8.4 percent of the crude oil was supplied from domestic oil wells and the remaining amount was imported from Saudi Arabia, Iran, Libya and the Russian Federation -- imports totaling $10.8 billion. TÜPRA?'s sales increased by 4.7 percent in 2006, up to 26.1 million tons, compared to 2005 figures. In 2006 TÜPRA? exported 61 percent of its total 6.2 million tons of oil products to major market players such as the US, EU and Singapore.