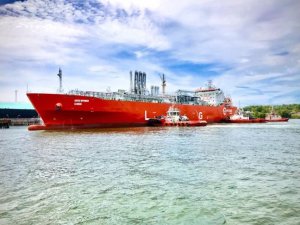 The company delivered two LNG cargoes in May and June as part of a master sale and purchase agreement between Petronas LNG unit and CNTIC VPower that was signed earlier this year.

The cargoes, shipped from the Petronas LNG Complex in Bintulu were sold on Free-On-Board (FOB) basis, amounting to a total LNG volume of 190,000 cubic metres.

The first cargo was loaded onboard the recently delivered newbuild CNTIC VPower Global.

The two companies are developing LNG-powered plants in Myanmar and the newbuild carrier will serve as a shuttle vessel for these facilities.

“With Myanmar as the latest nation to adopt LNG as a form of cleaner energy, Petronas looks forward to being a long-term partner and supplier”, he said.

Petronas added that it was working with CNTIC VPower for further LNG deliveries to the country.

This news is a total 571 time has been read
Tags: Bintulu LNG , CNTIC VPower Global , Petronas