Phibro gets vessel for storage 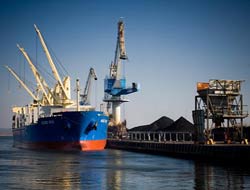 Phibro, has hired a second vessel for storing crude to profit from higher prices later in the year.

Phibro, has hired a second vessel for storing crude to profit from higher prices later in the year.

CITIGROUP commodities-trading unit, Phibro, has hired a second vessel for storing crude to profit from higher prices later in the year, reports Bloomberg. Phibro booked the 301,438 dwt, 1999-built very large crude carrier Ashna to store crude for as many as three months, according to the reports by SeaLeague AS in Oslo and Athens-based Optima Shipbrokers. The tanker was booked for storage on the US Gulf Coast, SeaLeague said.

Royal Dutch Shell and BP are keeping crude on vessels to profit from so-called contango, a market where buyers pay more for delivery later in the year than today. A purchaser buys oil now, keeps it for months at sea, and sells oil futures that are higher than the spot price.

Traders have hired tankers to store at least 15m barrels of North Sea oil, according to the median estimate of six North Sea traders and analysts surveyed this week. As many as 80m barrels of crude are being stored at sea globally, Frontline, the largest owner of VLCCs, said last week. An estimated 35 VLCCs from a global fleet of about 516 have reportedly been booked for storage.

The business has helped contract supply and pushed up rates on the spot market. Rates for VLCCs to transport crude from Saudi Arabia to Japan on.

This news is a total 1526 time has been read