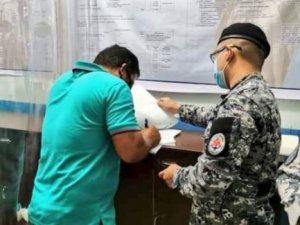 The Philippine Coast Guard has filed criminal charges against the operator and the officers of the bulker Vienna Wood N, which collided with the Philippine fishing vessel Liberty 5 on June 27.

The smaller vessel sank after the collision, and all 14 people on board remain missing.

After an initial investigation, the PCG has registered charges of "reckless imprudence resulting in multiple homicide and damage to property" with the prosecutor's office for Occidental Mindoro. The prosecutor will make the final decision on whether to proceed with homicide charges.

The Philippine Coast Guard contends that it did not receive any report about the collision until 0146 hours on June 28, nearly three and a half hours after the incident. The message came in via email, not by VHF or GMDSS, according to the agency. The PCG lacks GMDSS receiving capability, and it might not have been able to pick up a VHF transmission in the area of the casualty either, PCG commandant Vice Adm. George Ursabia Jr. said in a press conference June 30.

In a statement, A.M. Nomikos said that the crew reported the casualty soon after they conducted an emergency damage assessment.

"The crew inspected the damage sustained in order to ascertain if it compromised Vienna Wood N’s own safety and stability and then returned to the location of the collision to search for survivors. An overturned hull of what appeared to be a small vessel was spotted and reported to the Coast Guard," A.M. Nomikos wrote. "Vienna Wood N remained on scene until the Philippines Coast Guard arrived. Once the Coast Guard arrived, Vienna Wood N remained on scene until cleared to sail to a nearby port for surveys and repairs of the damages she sustained . . . The Owners, Ship Managers and the Crew are cooperating fully with the authorities as part of the ongoing investigation."

According to the Philippine Star, the Vienna Wood is currently undergoing repairs. Regional PCG head Cmdr. Leovigildo Panopio told media that his office would ask the court to place a hold order on the officers to prevent them from leaving the country before the case is concluded.

The owners of the Liberty 5 have filed a separate complaint against the crew of the Vienna Wood.

This news is a total 2063 time has been read
Tags: Philippine Coast Guard Files Homicide Charges Over Bulker Collision